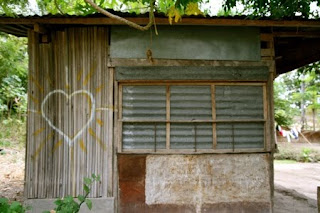 Suara Timor Lorosae 17 October 2009 Dili - President of the Republic Jose Ramos Horta, descended with the police task force last Friday (16/10) to tear down or clean up directly the community of suco Metiaut’s small shacks that had been erected on the beachfront.

The population who became the victims of this clean up consider the President of the Republic’s brutal tendencies to effectively be killing their income earning activities, because the small shacks they erected in order to earn a living through grilling of stays and fish.

“Today the President of the Republic himself ordered that these shacks be torn down without informing us the owners, the PR himself personally pushed our shacks down to the ground,” said Celestino Gama to journalists.

He considered this conduct of PR Horta in directly tearing down the shacks as the actions of a dictator, because these actions did not consider the community. “ I consider this conduct as being a dictatorship and not a democracy. At least inform us so that we have the chance to take them down, because we bought the materials to build them, we did not get them for free at the shops,” Celestino said.

As a law abiding citizen, Celestino says he respected the decision of the President to tear down the shacks, but they should have given prior notice and not just descend abruptly using physical force. “What sort of attitude is this?” he added.

At the same location, the Head of the Suco Metiaut, Jacob Xavier lamented the actions of PR Horta in descending personally with the police to tear down the peoples’ shacks. PR Horta’s actions can have the effect of killing the small people who earn a livelihood by trading or grilling satays.

“I see PR Horta’s decision as being like he had a dream, because all of a sudden he decided to come and kill off the small peoples’ livelihoods, “ he lamented.

He said it is the community of Metiaut which cleans up the rubbish on the beachfront, despite the rubbish not being only theirs. “Just don’t blame us,” Jacob said.

Domingos da Costa Xavier asked the government to first prepare an alternative place for the community before taking the actions to tear down. “If they only tear down like this, where will the small people find livelihoods?” he asked.

STL observed that after PR Horta tore down their shacks, the population removed their timber and tin materials to their homes. (ends)
at Saturday, October 17, 2009