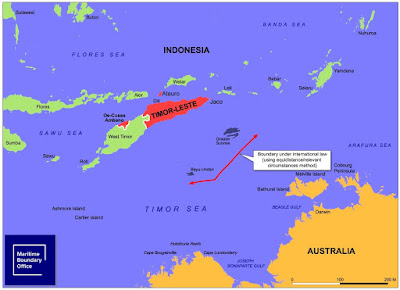 ETLJB 26 September 2016 TIMFO.ORG is the website of the Timor Sea Forum and supports East Timor's campaign to determine its maritime boundary with Australia.

There is no maritime boundary between our two countries, only provisional arrangements for resource sharing. The Timorese people say that "drawing the line" is an important and final step in fully determining their sovereign territory.

"Get Up" put together this ad to get the message out around the time of the G20 summit held in Australia earlier in 2015. Have a look.

Here's what they write:

A decade ago, Australia took advantage of a nascent East Timor to negotiate a remarkable treaty that short-changed the second poorest country in Asia out of tens of billions of dollars in gas and oil revenue. That included alleged spying on East Timor negotiators to get an upper hand.

When East Timor learned of Australia's espionage last year, they sought to renegotiate the treaty. What happened next was shocking. Australian agents raided the home of a former intelligence agent and seized his passport preventing him from traveling to the The Hague to provide his evidence.

The International Court of Justice has slammed the Australian Government's actions. But without international pressure, history may well repeat itself during this next round of negotiations.
at Monday, September 26, 2016