Colonialism, Culture and Gender in Timor-Leste

ETLJB 5 October 2012 Guest Poster: Josh Trindade No Timorese cultural values restricted women from participating in the activities of the community in which they lived; neither ritual, ceremonial, cultural, social, political or economic.The only frame of reference for participation in any of these realms was “capacity”. If one does not have sufficient skills, neither men nor women can participate “well” in public affairs. That does not mean that their interests were excluded because Timorese culture defines masculine and feminine roles with no reference or restriction to gender, except in very special cases (some ritual practices). That meant that a man or a woman could express themselves in either a "masculine or feminine voice".

Timorese culture indeed defined women in a more domestic, ritualistic and symbolic senses inlcuding the concepts of silence, fertility, immobility, peace and tranquility. But that did not restrict women from participation in the masculine-political arena of power to exercise. They could exercise both masculine power or feminine-authority if they choose too. Conversely, this also meant that men could participate in (or perform) traditionally feminine work such as ‘soru tais’, cooking, washing clothes, etc, and it is this very flexibility that has made Timorese culture survive internal and external pressures.

In the traditional realm and before European arrivals, there is an oral reference to an egalitarian society (‘tempu rai diak’ [the tranquil time], our parents call it in Tetun) where men and women equally participated in ritual, social, cultural, political and economic activities freely, in a balanced manner. It makes sense, because they (men and women) were in their small communities and they shared the same knowledge. There was a balance of knowledge between men and women. The tranquil time existed in the past - a stable social order established by our uneducated ancestors, where men and women were considered equal, even though they were still a naked people, as some early Chinese writer decribed them.

When the Europeans began arriving in 16th century, the worst thing they did was to disrupt the local social orders by working closely with the ‘gate-keepers’ (the local liurais) and ordered them to act like kings in the western feudal or monarchical systems. This ‘social order disruption program’ was implemented through the ‘gate keepers whose original role was to protect the people but now they were working to defend the colonial ‘dirty hidden’ interests. In implementing this ‘social order disruption program’, the colonisits often appointed ‘wrong’ people to exercise political power which proved disastrous to local values and the population.

The Timorese were confused because their social order was disrupted and replaced with the colonial social order which was often strange to their own worldview. The colonial power not only tried to subjugate local ideas and knowledge. It also trained the colonised, the Timorese, to dislike themselves, to hate and reject their own culture, to think negatively towards their traditional values, to degrade their own knowledge, to interpret 'barlaki' as an act of selling and buying women in the economic sense, to think of their belief system in a negative way so that the colonial power could better dominate them. This phenomenon still happening today in Timor-Leste. 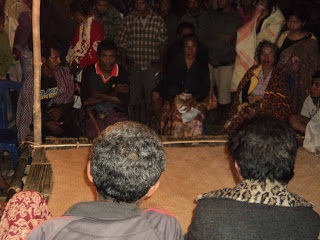 Photo: Two women representing their clan, exercising masculine power, negotiating their interest with other clan. This photo also proved that women in Timor-Leste can become 'Lia Nain' in traditional activities. The photo of the women, came about with an interesting story that I want to share with everybody. The photo was taken on 11 June 2012 (during my uncle’s funeral ceremony), in my house located in Ahabu’u, Suco Babulo, Uatolari, Viqueque. This was a very interesting negotiation for me to observe at that time. The negotiation involved my family as the wife-taker (fetosan, the life taker), in inferior position and the two women representing the wife-giver (umane, the life giver) in the superior position.

It is interesting to observe how the idea of gender, the masculine-power and the feminine-authority dynamics played out in the negotiation because there were two men (my brother and my uncle) representing the wife-taker (life taker, the masculine values) in an inferior position to two women representing the wife-giver (life giver, the feminine values) in the superior position in the Timorese marriage relationship. It is under this complex that the negotiations took place.

Gender (male or female) became less important here. If we put this situation in 'modern gender equality discussions', it becomes a delicate issue. Secondly, the two women came from another language group (Makasae of Ossu in this case) and my language group itself which is Naueti. Strangely, the whole negotiation was carried out in Makasae because my brother and my uncle are fluent in speaking Makasae while the Two Women can not speak our language.

Many people could not follow the discussion as the Makasae they were using is one level higher than the everyday Makasae, almost a ritual language. When one party agreed to the other party’s opinion or point(s), they said, “ai loloro” (agreed).

All the sufferings they went through, until today, they use this ritual language and blamed their sufferings on the colonists (wono malae, le'a malae).

Lines 3-6 describe the whole sufferings during the colonial periods. As an example, they have to hide on the mountain - Mount Matebian which is just close by (line 5).

Line 7 specifically described the cost of the foreign war/foreign conflict ("wono malae, le'a malae"). It left behind many children without parents. Many elderly who could nott survive, left us behind, and took with them the wisdom we need for our existence. Interestingly, there is no blame on the Timorese who worked for the colonial. You can interpret this in anyway you want, but I think there is an explanation for it:

From line 10-13, it explains the complex relationship that we have. The colonial collaborators in our village, could have been one of the brothers, the uncles, the aunties, the nephews, etc. But they must fall into one of the categories in lines 10-13; therefor, it is possible to reconcile. That is the demand of our ancestors and Lulik. The above ritual language, is used during the Uma Lulik (Sacred House) inauguration and many other rituals after '99. I am guessing in other language groups, they have a similar interpretation of the event.
at Monday, October 15, 2012

This is a great Update. In this globalised world it is of vital importance to understand different language and culture. Adapting to a new culture is vastly important and this article will help people understand the culture in Timor-Leste . Nice one...way to go :)