Short description of the trial proceedings and decisions in these cases

Meeting of the Council of Ministers of 25 September 2019

The Council of Ministers met at the government Palace in Dili and heard a presentation by the Minister of the Interior, Filomeno da Paixão da Jesus, concerning the priorities of infrastructure construction of the Ministry of the Interior. Based on the vision, mission and strategic plan for the modernization of the National Police of Timor-Leste (PNTL) and with objectives of strengthening the community police and ensuring the safety of the population the project, which relies on the support of New Zealand cooperation, presents a construction plan up to the year 2030 of 452 buildings of the Community Suco Police, in the 12 municipalities and in the Special Administrative Region of Oé-Cusse Ambeno (RAEOA).

The Secretary of State for the Environment, Demetrius de Amaral de Carvalho, gave a presentation to the Council of Ministers on the Second National Communication of Timor-Leste under the United Nations Convention on Climate Change (UNFCCC). Following the ratification of the UNFCCC in October 2006 and the Kyoto protocol in October 2008 and as a member of the UNFCCC, Timor-Leste has the obligation to submit, every four years, the National Communication to the United Nations Convention on Climate Change, a report which details national progress and commitments to mitigate the effects of climate change.

The Council of Ministers approved a statement of sorrow for the death of Father João de Deus Pires, deceased on 22 September, at the Guido Valadares National Hospital in Dili. His role will be remembered in the history of Timor-Leste, during the Indonesian occupation, and the Timorese will never forget the altruistic spirit of this missionary and great fighter for the freedom of the Timorese people, with whom he undertook to serve, as a priest and as a humanist. At this moment of so much grief for the religious and the Timorese people in general, the Government of the Democratic Republic of Timor-Leste presents its deepest condolences to the family of the esteemed Father João de Deus, the Catholic Church and the Salesian family of Timor-Leste.

The Minister of Defense, Filomeno da Paixão da Jesus, presented the proposal for deliberation, approved by the Council of Ministers, concerning the integration of members of the F-FDTL in the contingent of the Armed Forces of Portugal to be sent to the Central African Republic, within the framework of the Integrated United Nations Multidimensional Mission for the Stabilization of the Central African Republic (MINUSCA, acronym in French).

The Council of Ministers analyzed the Government resolution, presented by the Acting Minister of Petroleum and Minerals, Agio Pereira and the National Petroleum and Minerals Authority of Timor-LESTE (ANPM), concerning the authorisation for the opening of public tenders for the conclusion of petroleum contracts, in order to carry out research and oil production activities, under the Petroleum Activities Act and the Petroleum Procurement Regulation. The proposal will be analysed again at the next meeting of the Council of Ministers.

The Council of Ministers approved the proposal for a Government resolution conferring on the Coordinating Minister for Economic Affairs, Fidelis Manuel Leite Magalhães, the mandate for the negotiation of Timor-Leste's accession to the World Trade Organization. The Council of Ministers also determined that the Minister will be supported by a delegation with representatives of the Ministries of Legislative Reform and Parliamentary Affairs, Finance, Foreign Affairs and Cooperation, Health, Tourism, Trade and Industry, Agriculture and Fisheries and Petroleum and Minerals.

The Council of Ministers gave full powers to the Minister of Education, Youth and Sport, Dulce de Jesus Soares, for the signing of a cooperation agreement with the United Nations Educational, Scientific and Cultural Organization (UNESCO), for a project to strengthen science and mathematics in basic education in Timor-Leste, funded by the Government of Japan.

The Minister of Public Works, Salvador Soares dos Reis Pires and the National Procurement Commission of Timor-Leste, presented a proposal for deliberation, approved by the Council of Ministers, for the supply of light fuel to the electricity company of Timor-Leste (EDTL) for the years 2019 and 2020. ENDS

JSMP believes the decision of the Suai District Court in a case of sexual abuse against a disabled victim that was decided on 5 March 2019 was inappropriate because the replacement of the original change resulted in a very lenient penalty against the convicted person even though the court knew that the victim was very vulnerable due to physical and psychological disabilities.

The court failed to explore and consider the relevant facts in this case, and imposed a penalty of only five years in prison. This penalty is not appropriate or proportional to the severity of this crime.
If the court maintained Article 172 of the Penal Code on rape and Article 173 (letra c) of the Penal Code on aggravation, as set out in the charges of the public prosecutor, and assessed the facts and the circumstances appropriately, the court could have ensured a proportional and commensurate sentence in this case.

The East Timorese law and justice civil society organisation, the Judicial System Monitoring Program, has for many years now, always acted to support the rule of law in East Timor like few other CSO's have managed to do.

JSMP has courageously defended the Constitution, made sound criticism of government agents, and kept a very close eye on the Third Pillar of Democracy, the Courts.

With its continual monitoring and reporting of proceedings in all four District Courts, JSMP has created an enormous body of work that contains an historical record of matters before the Courts in East Timor that is not available any where else.

ETLJB wishes to express profoundest solidarity with JSMP, to draw attention to this most vital CSO and congratulate all those who have worked so hard on the program.

Human Rights Defenders Network: We strongly condemn acts of violence against a disabled person and we urge all people to resect and value disabled persons in this nation 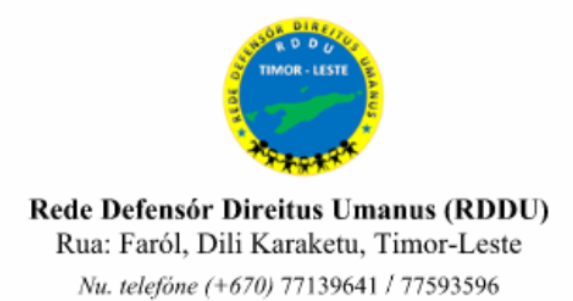 Human Rights Defenders Network: We strongly condemn acts of violence against a disabled person and we urge all people to resect and value disabled persons in this nation

The Human Rights Defenders Network (RDDU) is comprised of Civil Society organizations that deal with Human Rights issues. This network exists to carry out monitoring and advocacy in relation to cases involving human right violations that occur in Timor-Leste.

The Human Rights Defenders Network urges all people to respect and uphold the principles and values of human rights that are enshrined in the RDTL Constitution and international treaties adhered to by the State of Timor-Leste. These principles and values need to be put in practice so that no person has the right to discriminate, violate or mistreat any other citizens, including disabled persons, in Timor-Leste.

In response to the immoral and violent acts that have violated the rights of another person, in this case a disabled person, the Human Rights Defenders Network urges:

1.      The PNTL, and the criminal investigations unit in particular, to immediately find the perpetrators of the violent acts committed against the disabled person that were shared on social media.

2.      The Public Prosecution Service to promptly investigate the perpetrators who committed these acts against the disabled lady.

3.      The courts to convict those persons who have committed a crime against a disabled citizen in accordance with the applicable law.

4.      The Ombudsman for Human Rights and Justice to support this process to identify the perpetrators who committed the offences against the lady who suffers from a psycho-social disability.

6.      All persons to collaborate, especially those who witnessed these acts, to provide information to the PNTL or local authorities, so they can find the perpetrators.

7.      All persons to respect and value the rights of all citizens, including the disabled, in this nation.

8.      The State of Timor-Leste to ratify the International Convention on the Rights of Persons with Disabilities, as a matter of urgency!

Extraordinary Meeting of the Council of Ministers of 27 September 2019

The Council of Ministers met at the Government Palace in Dili and approved the Government Decree, presented by the Acting Minister of Petroleum and Minerals, Agio Pereira and the National Petroleum and Minerals Authority of Timor-Leste (ANPM), which regulates the procedure concerning the allocation of areas of the territory of Timor-Leste to research and oil production activities.

The analysis of the Government's resolution on the authorisation to open public tenders for the conclusion of petroleum contracts was also continued, with a view to carrying out research and oil production activities under the Law of Petroleum Activities and the Regulation of Petroleum Public Procurement.
at Tuesday, October 01, 2019 No comments:

Extraordinary Meeting of the Council of Ministers of 27 September 2019

The Acting Minister of Agriculture and Fisheries, Fidelis Leite Magalhães, gave a presentation to the Council of Ministers on the disease that has caused the deaths of hundreds of pigs in the country.

Samples were taken from these animals and sent for laboratory analysis in Australia confirming that these animals suffer from African swine fever.

This disease is highly contagious among animals, not producing effects on humans and has affected several Asian countries.

The Ministry of Agriculture and Fisheries, in collaboration with the Government of Australia, has taken all necessary measures to limit the effects of this outbreak, for which there is still no remedy, cure or vaccine.