The result of LAP’s constitutionality review: only an article about Maritime Boundary in the law is unconstitutional

The result of LAP’s constitutionality review: only an article about Maritime Boundary in the law is unconstitutional GMN Diario Nacional, March 13, 2019 Language source: Tetun

The Court of Appeals has announced its decision regarding the legality and constitutionality of changes to the Petroleum Activities Law, singling out only an article about Maritime Boundaries Treaty in the law that is unconstitutional.

“I just want to inform that only one article in the changed Petroleum Activities Law that is unconstitutional and against Timor-Leste’s constitution,” Deolindo Dos Santos, the President of Court of Appeals, told media at his office in Kaikoli, Dili on Tuesday (12/03).

The Court rules on changes to the Petroleum Activities Law comes as the government is pressing forward to withdraw US$650 million from the nation’s Petroleum Fund to buy out ConocoPhillips and Royal Dutch Shell’s holdings in Greater Sunrise fields.

The government made the move after the President of the Republic approved the government’s controversial amendment to the country’s Petroleum Activities Law after first vetoing the change amid concern it would lead to misuse of funds.

However, soon after the President of the Republic approved the changes, on January 30, a letter signed by 23 members of parliament from the opposition parties asked the Court of Appeals to review the legality and constitutionality of the changed Petroleum Activities Law.

The oppositions maintained the decree was illegal, and warned its modification risked losing transparency and accountability of petroleum fund use.

Commenting on the Court’s rules, President of National Parliament, Arao Noe said all the changes to the Petroleum Activities Law were constitutional; only one article about Timor-Leste and Australia’s Maritime Boundary Treaty was against the law because National Parliament had not yet ratified the treaty.

“The Court said only one article about Maritime Boundary Treaty is against the law, so others are legal and the government could continue its plan to withdraw money from Petroleum Fund to buy out ConocoPhillips and Shell’s stakes in Greater Sunrise,” Noe said.

The purchase of Shell’s 26.56 percent and ConocoPhillips’ 30 percent stakes in the project will allow Timor-Leste to push for development of the field and its gas-processing industry in the southern coast of the country.
at Friday, March 15, 2019 No comments:

Military response to gangs could “do more harm than good,” warns Fundasaun Mahein

Calls for military curtailment of Martial Arts Groups (MAGs) activities by the National Defense Force in Timor-Leste “could do more harm than good,” Fundasaun Mahein has warned.

Joao Almeida, Fundasaun Mahein’s Acting Director, said that expansion of F-FDTL mandate into domestic issues would be a “violation of the law, and a slippery slope toward increased military involvement in internal matters” – pointing to examples around the world where military had overstepped domestically and become “difficult to rein it in.”

The comments come as the Chief of State-Major General of the F-FDTL Lere Anan Timur called for military intervention to combat MAGs last week. Timur has said that MAG violence poses a threat to public safety.

In a lengthy statement released Friday, Almeida warned of a danger to tackling MAGs without addressing the “underlying trends that have led to the rise of MAGs,” pointing to potential threats and opportunities posed by MAGs in tackling issues of youth violence.

“MAGs must be understood in the context of several demographics, economic, and political factors in Timor-Leste,” he said. He pointed particularly to Timor-Leste’s youth bulge, high unemployment rate, “inadequate education systems and lack of alternative communities for young people, such as sport teams, volunteers groups or etc. Just on a quarter of Timorese youth are currently employed in the formal sector with statistics showing the rate decreasing. He said of the 8,600 young people who received vocational training in 2017, only about 800 went on to find jobs – less than 10 %.

“Quite simply, there are not enough new jobs being created to meet the needs of the growing youth population,” he said. “This is due in no small part to the government’s lack of investment in the non-oil economy.”

“Taken together, these trends result in a population of young people, who, without work or school to fill their days and with few prospects for the future, will naturally seek out other forms of social interaction, stimulation, self-worth, and meaning.”

“MAGs thus fill a gap in society formed by lack of opportunities for youth,” he said. Almeida said he agreed that MAGs potentially threatened Timor-Leste’s peace and security, but warned against overlooking the role of MAGs or sensationalizing their impact. “It is important to keep worried about MAGs in check,” he said.

“While MAGs do present a challenge, they often demonized in public discourse and made to be a bigger problem than they are.” “Only 4 percent of police officers say that MAGs police are the greatest threat facing their locality.”

Amongst the security watchdog recommendations to address MAG violence the organization called on the government to boost youth employment opportunities, revise the educational curriculum to “ensure it matches Timor-Leste’s current and future needs,” work with families to keep children in school and develop more alternative forms of social association.

The organization also called for MAGs to be made legal and regulated. “Banning MAGs will only drive them underground, making the problem more difficult to address and increasing youth resentment. “It is important to acknowledge that MAGs are not inherently problematic. While some MAGs act as vehicles for violent competition, the practice of martial arts itself can serve a valuable social function, giving young people a healthy outlet for aggression and a sense of camaraderie.”

Meeting of the Council of Ministers of March 5, 2019

Meeting of the Council of Ministers of March 5, 2019

The Council of Ministers met at the Government Palace in Dili and approved, with amendments, the proposal for a Government Decree presented by the acting Coordinating Minister of Economic Affairs, Agio Pereira, on the first amendment to Government Decree no. 2/2018 of February 21 that regulates the procedures of private investment.

With the approved Legal Diploma, the applications for Investor's Certificate submitted during the validity of Law no. 14/2011, dated September 28 and still pending, are evaluated and decided by the Investment and Export Promotion Agency of Timor-Leste, IP (Tradeinvest) under the terms of said law and the proposal to issue the Investor Certificate shall be sent by the Executive Director of TradeInvest to the member of the Government responsible for the coordination of economic affairs.

This proposal for a Government Decree aims to clarify doubts regarding the regime applicable to applications for the issue of an Investor's Certificate submitted, up until December 31, 2017, while the former Private Investment Law was still in force and that had not been decided by Tradeinvest.

The Council of Ministers continued its analysis of the proposal for amendment to the Subsidiary
Agreement with the Government of Australia for the Roads for Development (R4D) Phase II program submitted by the Ministry of Foreign Affairs and the Ministry of Public Works. This program of the Government of Timor-Leste, begun in 2012, has the technical support of the Government of Australia and the International Labor Organization (ILO) and aims to provide social and economic benefits to rural populations through management and improvement of the conditions of the national rural road network.

Military interferes with due process of law

In another shocking appearance, the leader of the military has opened his mouth when he should have kept it shut. See the media report below.

Lere has no legitimate role in any of these civil political processes. He should remain in the FDTL HQ until there is a war with another State; and make sure his soldiers understand the rule of law. He obviously does not.

His outrageous comments can not go unnoticed because what he does flies in the face of the proper conceptualisation of democracy, the civil political processes under the law and the correct role and function of the military in democracies. 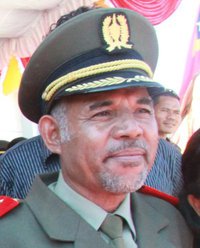 Lere should not be putting himself forth as a commentator on any such matter. He is wrong to do so. His actions are deplorable and despicable. It's none of his business and he should retreat from the political arena and the public arena altogether and watch over the security forces and the integrity of the nation from external threats.

National Parliament should have waited until the High Court had resolved the corruption case against Francisco Kalbuadi Lay before appointing him as a member of parliament, Major General Lere Anan Timur has said.

Speaking from the office of the President of the Republic, Timur said the actions of politicians using their positions to gain legal immunity denigrated the State and went against the independence many Timorese had struggled for.

“We first heard that the police would arrest Francisco Kalbuadi Lay. This did not happen and then he returned to parliament. There must be a solution, if not a solution, ask me so that I give a solution,” Timur said on Friday.

“We know that nowadays there are many people who are looking for opportunity. We can say they are opportunists because these people use their intelligence and look for legal loopholes for self-gain.” Timur’s comments came as the President of National Parliament, Arao Noe, sought to downplay the impact of Lay’s appointment as a member of parliament on Monday.

During a meeting with the President of the Republic Francisco Guterres Lu-Olo on Friday, Noe said National Parliament would “only” discuss revoking Lay’s immunity if it received another summons from the High Court for Lay to appear.

“Kalbuadi Lay does not hide in his immunity in National Parliament, all process will run smoothly, we are still waiting for a new notification letter from the court,” Noe said.

Lawyer Manuel Tilman agreed Lay’s case was a legal matter from the court but said the fact remained that the court had not issued an arrest warrant and the case remained at investigation stage.

Speaking in parliament after his appointment last Monday, Lay confirmed he had received three High Court summons but had not attended the hearings because he was receiving medical treatment in Singapore. He said his presence in parliament was not to gain legal immunity, and that he was ready to declare his case in court.

Addressing the investigation Lay said: “I will be examined by the Public Prosecutor whenever it is necessary … whether (I have been) wrong or right will be determined in court.” Lay’s investigation relates to allegations of corruptions while he was serving as Minister of Tourism, Art, and Culture in the former government.