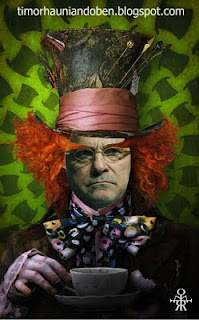 According to local media reports, the National Police will set up checkpoints and conduct an illegal weapons search in every suburb of the city.

It comes after a Fatuhada woman and a Bidau youth were shot in separate attacks last week.

The President told local media the shootings are by people who want to create instability within the community in exchange for money.

He told Radio Australia's Connect Asia program the President should not have commented until the all the facts were known.

Representatives from the United Nations Integrated Mission in Timor-Leste were unavailable for comment.

Ann Turner said...
This comment has been removed by a blog administrator.
25 July, 2011

I agree with Ms. Turner, but, wonder if this portraiture has something to do with Horta and others getting tougher with Woodside Petroleum. A 'sweetheart deal" was made exchanging garbage, the 'heavy oil' for gold, Timor Leste's light sweet petroleum, which is worth far more on the market and pollutes perhaps less than 5% of what the 'heavy oil' does. The gas deal was also theft. Is this the real reason outsiders don't like J.Ramos Horta?