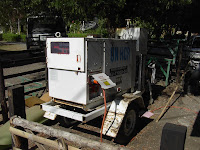 Mr Guterres said today parliament requested “an independent and detailed audit” in October 2010 so it could determine whether budgets it had allocated over the last four years had been spent properly and lawfully.

The parliamentary resolution said the audit was needed because of worsening blackouts, the long-overdue US$1 billion national electrification project and the government’s “total incapacity” to solve the problems.

Mr Guterres said that instead of a detailed audit the government provided an inadequate “advice” report from consultant company Delloitte which states: "The services rendered are in nature an advice and do not constitute an audit or other work that guarantees faithfulness in terms of the Australian Auditing Rules."

He said failure to commission an audit again showed the administration’s contempt for parliament.

Mr Guterres told parliament: “It underlines what United Nations officers have said about the executive government in Timor-Leste, especially the de facto prime minister, that he was an obstacle to constitutional democracy in Timor-Leste, with 'the executive, especially Prime Minister is seeking more and more power at the expense of parliament and the judiciary…… this may have diminished the effective roles of the other two pillars and significantly reduced the accountability of the executive and rule of law, with the rule of Prime Minister'."

Mr Guterres said that, despite the inadequacies of the Delloitte report, it pointed to various irregularities and raised urgent concerns that the parliament could not rely on the government to resolve.

“If parliament fails to act, things will only get worse, because Mr. Gusmao is either unwilling or unable to act to remove the members of his government who are responsible for the mess the electricity sector is in,” he said.

He called for the President of the parliament to schedule an urgent debate on the report in the presence of the government.