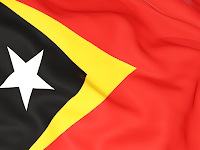 ETLJB 03 July 2013 - The Council of Ministers met this Tuesday, June 25, 2013, in the Council of Ministers meeting room at the Government Palace in Dili and received the United Nations Representative for Guinea-Bissau, and former President of Timor-Leste, HE Dr. Jose Ramos-Horta, updating them on the political process in Guinea- Bissau. Timor-Leste has been playing a supportive role in the development of that country, particularly through the establishment of the Agency for Cooperation of Timor-Leste.

At this meeting, the Council of Ministers also received Dr. Hafiz Pasha, former Minister for Finance and Economic Affairs of Pakistan and, till 2007, United Nations Assistant of the Secretary General and United Nations Development Program Assistant Administrator and Director of the Regional Bureau for Asia and the Pacific. Dr. Hafiz Pasha congratulated the Government of Timor-Leste for the Coordination Mechanism which is being developed for the implementation of the Strategic Development Plan (SDP), the Government Programme, and the Annual Action Plans. In July, this distinguished economist will present a report on his evaluation of this process.

At this meeting the Council of Ministers approved:

1. Government Resolution on the appointment of the Chairman of the Board of Directors of the National Communications Authority

Under Decree-Law 15/2012 of 28 March the Council of Ministers appointed Mr. António Correia Brígido as Executive Chairman of the Board of Directors of the National Communications Authority for a five year term.

The National Communications Authority (NCA) is a public institution to regulate the telecommunications sector.

Road infrastructure is important to ensure the flow of traffic on this key route connecting the Nicolau Lobato International Airport with central Dili. On the verge of Timor-Leste’s Presidency of the Community of Portuguese Language Countries (CPLP) in 2014, it is essential to improve facilities to allow the accommodation of a greater number of daily visitors. Therefore it is vital to undertake this improvement of the capital of the country.

3. Proposal of Law on the Special Regime for Defining Ownership of Real Estate

The Special Regime for the Definition of Ownership of Real Estate creates mechanisms that freely and fairly allow an efficient way to identify rightful owners of Property, to recognize property rights and promote land distribution. This proposal takes into account the history of Timor-Leste and the knowledge accumulated over several years of studies and public consultations to strengthen consensus and balance between the various positions on the issue.

The approval of this legislation by the National Parliament is a key step in a process that as necessary has been lengthy and exhaustive yet critical for the development of the country.

This legislation creates a financial instrument needed for better implementation of the Special Regime for Defining Ownership of Real Estate. This proposal of law will now be sent to the National Parliament for approval.

Investment Treaties are instruments which protect and promote foreign investment by providing for arbitration by third parties as an alternative to the national justice system and therefore attract more foreign investment. Since this type of arbitration is generally a slower process and not confidential, the Council of Ministers decided to establish a commission to study these considerations in view of national interests.

This study was developed in 2012 by the National Statistics Directorate in collaboration with the Ministry of Education, AusAID, and the World Bank with these three objectives: to take stock of the state of Education in the Country, identify gaps, and inform the development of evidence-based policies to improve schooling in Timor-Leste.

The preliminary results of this study indicate a substantial increase in enrollment in primary through secondary education. In 2002, 242,999 students were enrolled in the system and in 2010 there were 333.00 students. The increase in the number of teachers was also significant during that same period – it more than doubled. In 2002 there was a teacher for every 45 students and by 2010 this ratio improved to a teacher for every 25 students. The construction of new schools has also increased: from about 850 in 2002 to nearly 1,400 in 2012.

The Ministry of Education presented the project to create the Aileu Institute (Instituto Superior de Aileu – ISA), a proposed partnership with the International Association for Higher Education and Training (Aifes).

The Ministry of Education analyzed the school organization and administration structure, and noted that the current academic calendar of public education in Timor-Leste raises some administrative obstacles and proposed changes to its planned school calendar.

On August 20, on the occasion of the National Day of the F-FDTL Celebration this year the Betano Electricity Centre will be inaugurated. The Minister of Social Solidarity reviewed the preparations for these festivities which will include within them the second ceremony of the Demobilization of Combatants for National Liberation. Source: Presidency of the East Timor Council of Ministers V Constitutional Government Press Release 25 June 2013. Edited by Warren L. Wright
at Wednesday, July 03, 2013