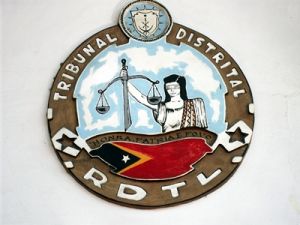 On 5 February 2016, the Dili District Court tried the defendant AC and sentenced him to 3 years in prison, suspended for 3 years. The court also applied an additional order requiring the convicted person to report to the police once a month for six months, and also ordered him to pay compensation of US$250 to the victim.

The public prosecutor alleged that the defendant violated Article 154 of the Penal Code for mistreatment of a spouse in conjunction with Article 35(a) of the Law Against Domestic Violence.
“JSMP supports the decision in this case because it is proportional to the criminal offence committed by the defendant. In particular, the court considered the importance of providing compensation to the victim to acknowledge and provide restitution for the damage she suffered,” said theExecutive Director of JSMP, Luis de Oliveira Sampaio.

JSMP believes this case provides a good reference point for other courts to consider when applying suspended prison sentences. JSMP believes this decision will deter crimes characterized as domestic violence in the future. This decision addresses JSMP’s concerns that perpetrators of domestic violence generally receive suspended sentences without any additional obligations or compensation. This decision shows that the courts are motivated to combat violence against women in Timor-Leste.
In its decision the court found that on an unspecified date in the month of April 2013 the defendant was intoxicated when he choked the victim and threw her to the ground.

In September 2013, the defendant and the victim argued because he suspected her of having a relationship with another man. The defendant punched the victim twice on the shoulder, kicked her in the back and choked her.

On 12 May 2014, the defendant punched the victim once in the head and removed her from the house because he was argry that she had sought medical treatment without taking their sick child who also needed treatment. These acts caused the victim to suffer swelling and pain to her shoulder, back and neck.

Pursuant to Article 92 of the Criminal Procedure Code, the court provided its decision via notification to the public prosecutor, public defender and the defendant because they were absent on the scheduled date.

The case was registered with the court as Case No.0009/14.DIMTN and was tried by a panel of judges comprising Jumiaty Freitas, Albertinha Neves and  Antonio Helder do Carmo. The Public Prosecution Service was represented by Ivonia Maria Guterres and the defendant was represented by Manuel Sarmento from the Office of the Public Defender.
at Sunday, October 23, 2016