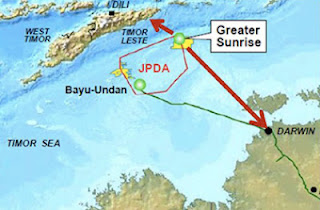 ETLJB 5 October 2016 Source: Government of East Timor Press Release Dili, 26 September 2016 - The Government of Timor-Leste welcomes the decision of the Conciliation Commission that the Commission has competence to continue with the conciliation proceedings. The decision follows a three-day hearing held in The Hague to hear the objections to its competence advanced by the Commonwealth of Australia.

A Press Release issued by the Permanent Court of Arbitration on the 26th of September on behalf of the Commission announced the unanimous decision regarding the challenge to its competence.
The Commission will now continue to exercise its function as described in Annex V of the United Nations Convention on the Law of the Sea, which is to “hear the parties, examine their claims and objections, and make proposals to the parties with a view to reaching an amicable settlement.”

Spokesperson for the Government and Agent for the case, Minister of State Agio Pereira noted “Timor-Leste welcomes this decision..This process is an opportunity to set a good example in our region and we will engage with respect for the commission and its recommendations, ever conscious of the importance of maintaining the best possible relationship with our close neighbour Australia.”

“Just as we fought so hard and suffered so much for our independence, Timor-Leste will not rest until we have our sovereign rights over both land and sea.” (Emphasis added) ENDS

Further information about the case may be found at www.pcacases.com/web/view/132, including the full text of the Commission’s Decision on Competence
at Wednesday, October 05, 2016