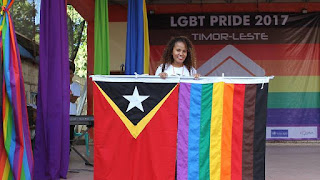 On 12 September 2019 the Judicial System Monitoring Programme (JSMP), continued to disseminate information to members of the Lesbian, Gay, Bisexual, Transgender and Intersexual persons community (LGBTI), as well as parents, the disabled and students in Liquica Municipality. 31 participants attended this training.


When JSMP arrived to provide training in Loidahar, the Village Chief recommended for the training to include the disabled and parents. The village chief said that not only members of the LGBTI community face discrimination in the family and in society, but also the disabled face discrimination. Therefore it is important to include parents in this training because they often discriminate against their children who belong to the LGBTI community or who are disabled.

This training was aimed at increasing the knowledge of the LGBTI community, parents, the disabled and students about democracy, the role of each sovereign organ, how the public can participate in the law making process and access to formal justice. Also, how the participants can pass on the information provided during the training to members of the LGBTI community and other community members, as well as society in general.


"The State has an obligation based on the Constitution and the law to develop policies that ensure the rights of citizens, especially members of the LGBTI community in all sectors, such as the political, economic, social and cultural sectors, as well as access to formal justice. Everyone has the same rights and obligations under the law as set out in Article 2 of the International Covenant on Civil and Political Rights (ICCPR) which has been ratified by the State, as well as Article 16 of the Timor-Leste Constitution. Therefore, the State and the entire community needs to treat all citizens and members of society properly without discriminating against them or prejudicing them based on their sexual orientation", said the Acting Director of JSMP, Casimiro dos Santos.


During the opening session, the Dato Village Chief, Mr. Oscar da Silva, asked the participants to focus on the materials provided by JSMP because they are very important in relation to the experiences of members of the LGBTI community, because often parents discriminate against their children who have a different sexual orientation. On a daily basis members of the LGBTI community face a range of discrimination from the family, community, as well as authorities who are supposed to protect their rights, but in fact their actions are contrary to the principles set out in the law. Also, the Dato village chief further emphasised the participation of members of the LGBTI community in State building, because often they have the capacity to compete for opportunities, especially employment opportunities.

During the training the participants provided feedback and stated that in the community they always hear comments that any man who has a different sexual orientation is appropriating women's rights and they shouldn't live in this society.

The participants also raised the issue of the right to access employment because to date they always face discrimination when they seek employment because public service providers always tell them they can't be employed because they have no role in State building. Therefore, JSMP was asked about its stance on such treatment.

Other issues related to justice, because participants were concerned about decisions in some cases to only impose fines. They asked if this is a type of penalty.


JSMP responded that discrimination against members of the LGBTI community in the family and society is normally related to prejudice in society about the existence of groups with this type of sexual orientation which is considered “taboo” and unacceptable in society. Therefore, to remove such prejudice, it is important to raise awareness through training like this to change such prejudices that exist in the family and society in general.

Meanwhile, in relation to the issue of the right to access employment, JSMP explained that the State has the obligation to protect and promote the rights of all citizens, including the right to access employment without discrimination based on race, colour, sexual orientation, etc as set out in Article 2.1 of the International Covenant on Civil and Political Rights (ICCPR) and Article 16 of the Timor-Leste Constitution.  Therefore, when you are discriminated in relation to your rights by State institutions, you can make a complaint to the Ombudsman for Human Rights and Justice (PDHJ) and also the Office of the Public Defender, because this is considered a violation of human rights. Therefore, JSMP's position is clear that violations of human rights are against the principles set out in the ICCPR and the Timor-Leste Constitution or are contrary with the principles of the Democratic Rule of Law.

This training was supported by the Government of Australia through the Australian Embassy in Timor-Leste together with the international agency Governance for Development (GfD) Australia.