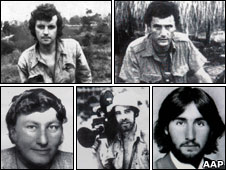 A short service will be held at dawn at the War Correspondents' Memorial of the Australian War Memorial. The dedication will include a minute's silence and the laying of wreaths.