The Concealed War The Forgotten History of East Timor, Taylor 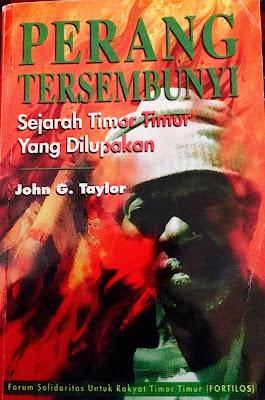 Highly recommended by ETLJB. I only have the Indonesian version.

If you see the English version and want to gain insight into the genocide perpetrated by the Indonesian State 1975-1999 in now independent East Timor, read it.

During this horrifying chapter in East Timor's history, up to 160,000 citizens died; proportionately one of the most violent and vilest genocides of the 20th century.

No one has ever been punished for the atrocious crimes against humanity, widespread human rights abuses and extra-judicial killings, torture, rape, massacres of the innocents, a long and bitter war between the East Timorese resistance to foreign domination fought for 24 years without a glance by the world except the Lusophone states; UN Resolutions treated with contempt, military support to the Indonesians militarily; mainly by the United States and Australia, at least.

But the resistance also had allies in Australia with freedom radio broadcasts from the Northern Territory into East Timorese/Indonesian air space and providing a valuable link to the outside world. And support grew from dissidents within Australia.

Even the catastrophe of the Santa Cruz cemetery massacre in 1991 did not move the world's heart and conscience. Indonesian Soeharto's Orde Baru ran amok in East Timor in classical Javanese style; but the elite did it through their military and sought to put a permanent cloak of secrecy upon the territory.

Upon their final defeat and Habibi's decision to allow a vote on separation from Indonesia, the East Timorese state rose to its rightful place in the community of nations, formally, in 2002. 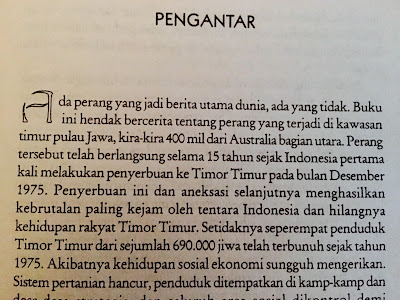 The legacy of the Indonesian invasion on 7 December 1975 and the following subjugation of the population and the infliction of savage genocidal policies, military rule, all left a traumatised and grieving community; probably not one member of whom was not tragically impacted by the occupation and genocide.

But still today, our government refuses the settle the maritime boundary with East Timor in the Timor Sea in a fair, equitable and just way; by complying with Australia's international obligations and participate in an equidistant treaty without further delay. Our country thereby robs the poor of their sovereign resources.

The oil and gas reserves in the Timor Sea that lawfully belong to the East Timorese people are being profited from, are being misappropriated by the Australian government and the energy cartels. And we all benefit from that moral stench.

Raise your voice against this injustice and demand your political representatives to agitate this issue. Obrigadu. WLW