Law by Blood and Death: Customary Law in East Timor 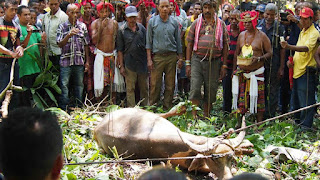 This note is a short account of the author’s experience of a customary law-making process in East Timor in 2001.

The whole village, including children, and guests, sat in a circular formation around the centre of the village totem. Tied to the totem were a cow, a dog, a pig and several chickens. There was a blue plastic bucket and coconut palm leaves cut into sections.

The ceremony began. I will only describe the events that I witnessed because I was unable to understand the language although there was an English interpretation that summarised what was happening. I and several of my international colleagues as representative of the UNTAET Land and Property Unit had been invited to attend and witness this law-making process by the village chief.

The purpose of the ritual was to enact a new law for the village’s territory and that law was that no more trees were to be cut down. Deforestation had ravaged the landscape all over East Timor during the Indonesian military occupation. Sandalwood tree forests had been overexploited almost to the point of eradication.

The animals represented the penalty that anyone would have to pay if they cut down trees.

One of the village officials drew back his katana and plunged it into the cow’s neck. The cow screamed, dropped to its knees with blood gushing from the wound. It continued to wail in its death throes until there was silence.

Next, the dog, muzzled, was held up and stabbed in the neck several times with a dagger. The dog yelped and screamed as it was stabbed and bled out to death.

The pig and the chickens soon followed the fate of their comrades.

As the cow bled out, the blue plastic bucket was held to the wound to collect its blood. One of the cow’s ears and strip of hide were cut from the beast and tied to a section of the coconut palm leaf. The palm leave was then dipped in the blood and the blood splashed upon the totem.

Declarations were made about the new law. The village chief apologised to his foreign guests: “I see that our foreign guests have become upset at what they have witnessed today. This is our way.”

The next part of the process was the formation of a procession of all in attendance that walked to a tall tree in a prominent location in the village territory. The blood soaked palm leaf with the cow’s ear attached were placed in the tree as a sign that a new law had been made.

While absent from the village during this procession, the animals that had been slaughtered were prepared for eating.

It was at this point that my colleagues and I decided to leave. The prospect of eating dog meat was the most difficult concept to deal with.

This law-making process according to custom is a dramatic variation to the way that we are accustomed; the bloodless passage of a bill through Parliament. I record it for our edification. One other interesting aspect of this phenomenon is that it occurred in a village just outside Dili in the highlands back from the coast a little but just a short distance from where the formal law-making processes of the Parliament occur.