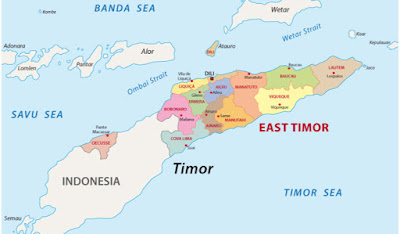 Concern is mounting about Indonesia's response to the deadly coronavirus, despite having received direct flights from Wuhan in the early weeks of the outbreak.

A study by a group of Harvard University researchers found it was statistically unlikely the virus was not in Indonesia.

Australia's health authorities were "closely watching what happens in Indonesia".

"Obviously, it is somewhat surprising that there are no cases," the Australian government's Chief Medical Officer Brendan Murphy said.

The report appeared in the 11 February 2020 edition of the Sydney Morning Herald. The full article may be read here.

The World Atlas map shows the territorial boundaries between Indonesia and East Timor; most of the border has been formally settled though a few disputed points remain.

The circumstances raise questions about the potential transmission of the corona virus into the East Timorese population and the yet unknown risk of exposure to the corona virus.

But is is not an unreasonable expectation that the virus has entered the Indonesian population, has gone undetected to date and the interaction between the two countries would suggest that closing the border would attract criticism from Jakarta, cripple the trade in essential goods including food and energy and bring much economic disruption.

Soft border areas would be a particular area of concern as would illegal entries both ways.

At least five NTT regencies have land borders with the neighbouring country and seven have sea boundaries, according to the NTT Boundary Agency.

The consequential concern that has been expressed by international experts is that countries with underdeveloped health care systems will have much less capacity to meet the demands that an outbreak present including highly specialised medical technology, public health experts, sufficient medically-trained staff, sufficient hospital beds, sufficient medications to treat co-infections, isolation and treatment. And so, it is expected that the virus will have a much graver impact in those countries; and perhaps a higher mortality rate, which is presently unknown.

That would leave East Timor in a most invidious situation. It is the duty of East Timor's developed neighbours such as Singapore, Australia and Indonesia itself as well as the international community to assist East Timor to manage what is not unreasonably anticipated as an outbreak.

East Timor has already pleaded for assistance from the Governor of Bali to quarantine East Timorese citizens in that Province but that plea was denied.

Marius said the administration was ready to help Dili put their citizens into quarantine in NTT should President Joko “Jokowi” Widodo instruct them to do so.

The governor had ordered the NTT Health Agency and the director of WZ Johannes General Hospital in the provincial capital of Kupang to set up a temporary shelter at the Naimata Mental Hospital for the Timor Leste returnees, he added.