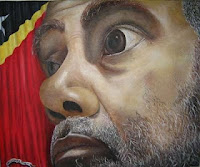 WARNING MACHINE TRANSLATION ORIGINAL HERE Lusa 8 de Fevereiro de 2020, 17:16 East Timorese historical leader Xanana Gusmão defended this Saturday that holding that early elections is the “fair and democratic” solution to resolve the political impasse in the country after the lead of the State Budget for 2020.

"The informal analysis of the CNRT [National Congress for the Reconstruction of Timor-Leste] is that early elections are the fair and democratic solution to resolve the situation," said Xanana Gusmão, president of the largest party in the Government coalition, in an interview with GMN television.

"At the end of the process, if the President of the Republic, after listening to everyone, says that there is no solution, that there is no consensus among the parties, I feel that the solution is early elections", he defended.

Insisting that it is only an “informal analysis” and stating that he does not want to “influence anyone”, respecting the actions of the President of the Republic, Xanana Gusmão - interviewed in Tetum - he resorted to a proverb in Portuguese: “For great ills, great remedies ”.

Another solution, which involves a new Government, requires the current Prime Minister to resign, he explained, or to dissolve the Parliament if the General State Budget is not approved within 60 days "from the 1st of January".

Reinforcing that he spoke as an “ordinary citizen” - he does not hold any executive position - Xanana Gusmão analyzed the political scenario, with a Government in which the CNRT “is not integrated” because the President refuses to take office for the nominee members of the party.

He considered that the executive "has no capacity", causing contractions in the economy and serious damage to the private sector, redundancies and lack of money, with the majority of its members "being inexperienced".

The solution to the crisis, he said, was handed over to the President of the Republic who now has an “objective” view of what is happening, after extensive dialogues with political parties and various civil society organizations.

Xanana Gusmão said that the coalition that supports the Government, the Alliance for Change for Progress (AMP), “does not exist”, especially after the Budget vote - echoing statements by Prime Minister Taur Matan Ruak, leader of the Popular Liberation Party ( PLP), the second coalition force. see original for remainder.
at Tuesday, February 11, 2020