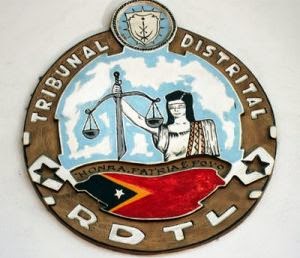 The incident took place in Ermera in March 2012.

The allegations made by the Ministry of Public, read out by the judge president, claimed that about 9pm, the defendant became angry with MF for sleeping at her brother’s house without telling her husband.

The prosecution alleged the defendant threw a pillow at his wife and pushed her onto the bed and then searched for a machete with which to threaten his wife, who was five months pregnant.

MF ran to her brother’s house in fear and, together with her brother, reported the incident to the police.

MG admitted to some of the allegations made against him but disputed others.

He told the court he was looking for a machete with which to cut plants in front of the house to release his anger, not to kill MF.

“My wife knows when I get angry I often release my anger on things butI never beat her,” MG said.

The couple lived together from the time of the assault and there were no further incidences of violence in those intervening years.

Counsel for the defence, public lawyer Paulino da Costa Alves, requested the judge hand down a suspended sentence to his client as MG had been living with his wife without problem since the incident.

The judge president obliged, handing MG a one year suspended sentence. Source: Venidora Oliveira The Dili Weekly 08 May 2014
at Friday, May 23, 2014