Husband attacks wife with hammer and knocks her unconscious with rock 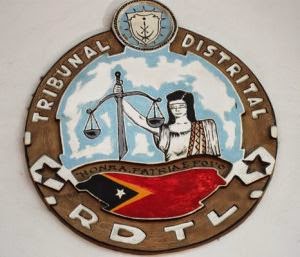 ETLJB 02/07/2014 The Dili Weekly reported on 11 June 2014 on a case of domestic violence in which a husband attacked his wife with a hammer and knocked her unconscious by throwing a rock at her.

The husband, known in court as MF, said he attacked his wife, known as MB, because she did not take adequate care of his extended family.

The incident took place in Liquisa in May 2012.

MB told the court that at about 5pm, she returned home from the market to find her intoxicated husband waiting for her.

With a hammer in his hand, he followed her into the bedroom.

“My child then lay down on the bed crying when he saw (my husband) was about to hit me.I dodged suddenly so he hit the cupboard instead of me,” MB said.

She said her husband threw a rock at her as she fled, causing her to lose consciousness.

MB told the court her husband attacked her whenever she returned from the market.

“I don’t know why he always does harm to me,” MB said.

The court heard MB sold goods in the market while her husband worked on a farm to make enough money to feed their three children and pay their school fees.

MF said he was angry with his wife as he felt she treated his family poorer than her own.

“Since she makes money, she only gives money to her family who visit us but not for my family, who sometimes goes back home and brings nothing,” the defendant said.

He said he beat his wife because she did not comply with his instructions to treat family and her own the same.

After hearing of the evidence of the victim and defendant, judge president Duarte Tilman handed down a suspended sentence to the victim. Source: http://www.thediliweekly.com/en/news/security-defencejustice/12502-mb-fell-fainted-for-treating-families-unequally
at Wednesday, July 02, 2014