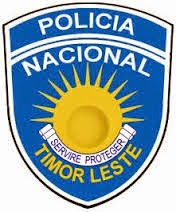 ETLJB 19/06/2014 From Fundasaun Mahein 11/02/2104 - This week the PNTL released its strategic activity plan for the years 2014-2018.  In this release, entitled “PNTL Business (Activity) Plan 2014-2018”, the PNTL provides a comprehensive overview of its organizational goals and activities for the upcoming five years.  Among the topics covered are the PNTL’s vision, mission, principles, motto, and the strategic direction and objectives for 2014-2018 as defined by the RDTL government.  The strategic plan also reinforces the PNTL’s “VIP” policing model, which advocates for visibility, involvement, and professionalism in every PNTL activity.

Fundasaun Mahein (FM) welcomes the transparent release of this plan, and is happy that the PNTL has invited FM to participate in the launch of the 2014-2018 strategic plan.

These priorities will be highlighted within the implementation of the PNTL’s two core objectives: reforming and developing the PNTL institution, and the consolidation of public order and community security. FM views the PNTL’s objective of reform and development - which calls for the prioritization of budget, finance, and administration - as particularly crucial to the organization’s success. More specifically, the PNTL strategic plan mentions “Delivering financial and administrative strategies to manage the human and physical resources of the PNTL.”

FM applauds the attention to detail and close thought that the PNTL has put into the creation of the 2014-2018 strategic plan. FM also welcomes the report’s transparent release, and is happy that the PNTL has invited FM to participate in the plan’s launch.

At the same time, it is important to remember that any plan unaccompanied by resources or action is destined to fail.  The creation and release of the 2014-2018 strategic plan is a step in the right direction, but the PNTL must now prepare to tackle the much more difficult task of successfully implementing the activities it has promised to carry out.  FM hopes that the multitude of key activities specified in the 2014-2018 Business Plan will be carried out, and that all PNTL members will act in unison to abide by and seek to achieve the goals and activities set out in the plan.  It is of utmost importance that PNTL officers take the goals outlined in the strategic plan seriously.  It is also important that the PNTL works to ensure accurate and transparent self-assessment of its successes and failures to implement its planned activities over the next five years.

As a civil society organization monitoring the security sector, FM will do its part to ensure that the PNTL is held to the standard that it has set for itself.  Over the next few weeks, please keep an eye out for a full-length Mahein’s Voice report offering in-depth analysis and commentary on the PNTL 2014-2018 strategic plan. Source: http://www.fundasaunmahein.org/2014/02/11/pntl-releases-2014-2018-strategic-plan/  11/02/2014
at Thursday, June 19, 2014