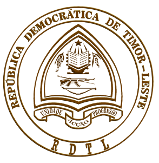 ETLJB 29/07/2014 - Dili, 14 July 2004 - His Excellency the President of the Democratic Republic of Timor-Leste, Taur Matan Ruak, this Monday, 14 July 2014, submitted Decree no. 10/III of the National Parliament on Media Law, to the Court of Appeal, requesting a review of constitutionality, pursuant to articles 149 and 164 of the Constitution.

Having discussed this issue with several dignitaries and associations, and received many petitions, His Excellency the President of the Republic deemed it necessary to submit to the Court of Appeal the issues raised regarding the constitutionality of the ruling of the National Parliament.

This decision is aimed at ensuring that the regulations approved regarding Freedom of the Press will not excessively limit the fundamental rights of citizens enshrined in art. 41 of the Constitution. Source: Office of the President Press Release 14 July 2014

Thanks for the informative post. It helped me a lot. May the Force be with you.
Arbitration Islamic Sharia law