Military leader warns: No repetition of 2006 Crisis and Reform of PNTL necessary 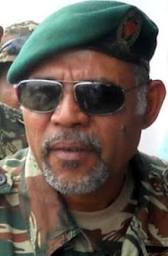 Chief of State for the Timorese Defence Force (F-FDTL) Major General Lere Anan Timur said that he would not want crisis similar to that of 2006 to emerge or occur again in the country.

He said that dialog was a unique way to resolve existing problem between the National Parliament and MTUL.

He stressed that the state body should be consistent with their decision no matter what happen or what would people say.

“The National Parliament should take a position as a state body. They have not to fall to pressures, otherwise the state body will have no value.

We used to fight for state body and not for one or two people’s interest.

They have to be consistent with their decision that if they say A it will remain A and not change to B,” Generla Lere said.

Chief of State for the Timorese Defence Force (F-FDTL) Major General Lere Anan Timur said that it would be important to do reform within the Timorese National Police (PNTL) institution.

Major General Lere said that the assailants or police officers who killed three civilians and wounded five people in Kulu-Hun, Dili recently were individual acts or responses rather than representing the police institution.

“I would say that the mistake committed by some police officers should not be generalised. We have to continue to trust in PNTL as it is the institution that enforces law and orders. Now the question is what is needed to be done and not to request for dismissal of PNTL Commando.