During the visit of PNTL Commander, Commissioner Police Julio da Costa Hornay to the victims’ families in Kulu-Hun, said that the PNTL Commando had handed this case to the court to process it lawfully. During his visit to victims’ families, Commissioner Police Hornay called on the victims’ families to remain calm and contribute to peace and stability while waiting for the legal process for this murder case. “... I have to focus on how to take action against this case because response out of law and order is breaching Commando’s will or order.

Therefore I apologise the families that may expect my presence here yesterday, but I could not make it,” Commissioner Police Hornay said. He said that the PNTL Commando took serious action against the police officers, especially two police officers that were suspected of engaging in murdering three young people in Kulu-Hun, Dili early morning on Sunday.

From this incident, it is important for the competent party to do a reform into security and defence institutions in order to avoid this kind of brutality in the future,” Fretilin spokesperson said in a press conference. Fretilin also extend their profound condolence to the loss of families and hooping those victims in the ICU can have a good recovery soon.

During the visit of the Timorese National Police (PNTL) Commando, Commissioner Police Julio da Costa Hornay, victims families in Kulu-Hun had called on the main leader of PNTL to better control its members, who carry weapons. They said that that police Commando should take serious action to control its members not to use guns or pistil to kill and wound civilians. “The [police] member, who is psychologically ill yet the Commando still let this officer to carry pistol.

When he was here he drunk a lot of whisky. This kind of attitude is not supposed to happen,” Victims’s family said. Another family member of the victims questioned that why police member or officer carry weapon freely even they were out of duty. She added that this kind of brutalism was not the first one, yet it had happened to another families or victims as well therefore the competent institution and the government had to take serious action about this case.

on Sunday early morning. President Lu-Olo said that the act of the police killing civilians breach the lwa and order; therefore the case should be processed legally. “Kulu-Hun case is a case that makes us sad and I can say that those police who response to the case was out of order because they were out of duty, yet bring pistol while going to party and killed people. Now we have to let it be
processed legally and the court will determine how serious the crime they had committed. The court will make decision about this case. 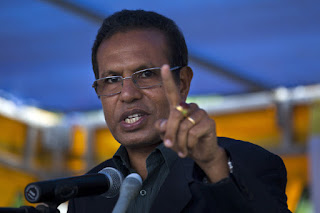 Prime Minister Taur Matan Ruak has urged the Ministry of Interior and the Timorese National Police (PNTL) Command to profoundly investigate a police deadly shooting this weekend in Kuluhun, Dili. Ruak directly oriented Acting Minister of Interior, Filomeno Paixão to profoundly investigate those police officers who involved in the fatal shooting which left three people died in place and five others
severely injured. Minister Paixão said there were four police officers who were suspected of involving in the case and they all had been detained to wait for further legal proceedings. “Let’s wait for all the legal process and based on that we will make a decision,” Paixão told reporters at Government Palace yesterday.

Two injured victims of Kuluhun deadly police shooting have been discharged from National Hospital of Guido Valadares (HNGV) on Monday. The deadly police shooting in party in Kuluhun this weekend has left three people died in place and injured five others. HNGV Director, Aniceto Barreto said two of the injured victims had been discharged from hospital two, one still in Intensive Care Unit after surgery and two others still admitted in the hospital.

“The injured victims of deadly shooting had gotten surgeries, two of them have been discharged and three others are still getting treatment in the hospital and one of them is still in Intensive Care Unit,” Barreto told reporters on Monday (19/11). Regarding the deadly massive police shooting, the Timorese National Police (PNTL) Command had detained four police officers with initial JPA, FMS, AJ and AT. “Besides JPA and FMS as main suspects, we have also detained AJ and AT because the two of them were also suspected of attending the party carrying their guns,” PNTL Commander, Julio Hornai said.
at Thursday, November 22, 2018