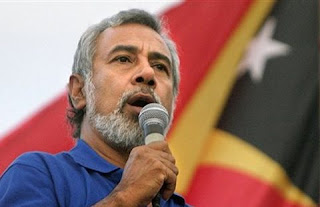 Timor-Leste’s Oil and Gas Chief Negotiator, Xanana Gusmao considers President of the Republic’s decision to veto the nation’s largest ever budget of US$2.132billion for 2019 is illogical.

“Oh, President had vetoed the bill, had not he? And he called for dialogue, really? I have read his statement and his reasons for vetoing the bill were illogical,” Xanana spoke to media at Nicolau Lobato Airport upon his arrival from abroad on Saturday (26/01).

Xanana, who is also the President of the National Congress for Timorese Reconstruction (CNRT) party, the biggest party in the current three-party coalition government, warned that there would be no dialogue to resolve the problem, let parliament do what it needs to do, overrule the President’s decision regarding 2019 General State Budget (OJE).

President Lu-Olo asked parliament to revise the US$2.132 budget ceiling, which allocated about 30 percent to oil and gas projects at the expense of devoting attention to education, health and other public services. Only around one eighth of the budget expenditure is devoted to health, education, clean water and agriculture.

The budget included US$650 million for the buyout of ConocoPhillips and Royal Dutch Shell’s holdings in Greater Sunrise gas fields, for which the Timor-Leste’s government committed to pay off, respectively in 2019 and 2020.