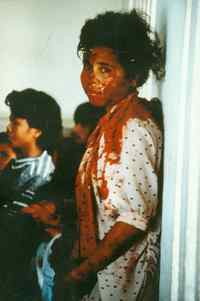 The 12th of November 2016 marks 25 years since the Santa Cruz Massacre and is National Youth Day in Timor-Leste. Events and activities supported by the Government are taking place to commemorate a day of both sadness and hope.

November the 12th was designated as National Youth Day to honor the courage and determination of hundreds of young people who in 1991 attended Mass at the Church in Motael, Dili and then marched to the Santa Cruz cemetery, paying their respects to their recently murdered colleague Sebastião Gomes. Their peaceful march gave rise to singing and the waving of banners expressing their deep yearning for justice and freedom.

“Chega!”, the report of the Commission for Reception, Truth and Reconciliation in East Timor, records that shooting by Indonesian soldiers began once students arrived at the cemetery as “Soldiers opened fire with automatic weapons into the unarmed and peaceful crowd, many of whom fled into the grounds of the cemetery.” Independent estimates put the number killed as high as 271, with 250 listed as missing.

The Santa Cruz massacre was a turning point in Timor-Leste’s struggle for self-determination as footage smuggled out of the country and reporting by visiting international journalists brought the intolerable situation in the country to the attention of the world.

Government Spokesperson Agio Pereira noted “as we commemorate the massacre and celebrate National Youth Day each year, we recognize the bravery, resilience and enthusiasm of our young people and their potential as agents of change.”

“Each year on this day”, he said, “we both honor the past and declare our hope for the future, reflecting on the courage, character and contribution of the youth of Timor-Leste.”

Events for the day include a Mass said at the Motael Church, a procession between the church and the cemetery, and a Commemoration Service in the cemetery where the construction of a special monument will be launched. Other cultural and sporting events are taking place over a number of days. A photographic exhibition, theatre and various opportunities for reflection will feature as part of the commemoration. ENDS