The East Timor Law Journal (ETLJ) was a project that I began in 2004, some 14 years ago. I have not paid much attention to that as most of my legal commentary is now published on the East Timor Law & Justice Bulletin.

Articles published on ETLJ have been cited in academic works so even though it ceased publication of new material, its archived material is worth keeping.

And pointing out as a good starting point for researchers into East Timorese legal affairs as is its related site, the East Timor Legal News Archive 2006-2008.

I was prompted to take a look at the blogger statistics for ETLJ today and reproduce them here. I think if you click on the image, you may get a better view. I was a bit surprised by some of the stats. 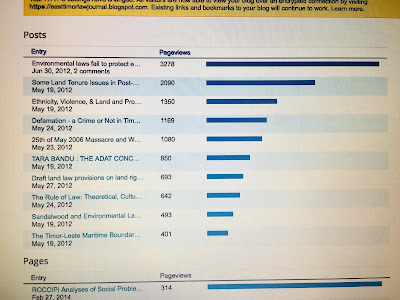 The point of these statistics is that several articles on ETLJ have been viewed several thousand if not several hundred times; and often times cited by other authors as authoritative commentary.

The second point is that ETLJ (in conjunction with ETLJB) assists in the dissemination of other independent legal thought on the issues jurists identify in the legal system in East Timor.

ETLJ and ETLJB are open to receipt and publication of articles pertaining to the Law in East Timor.