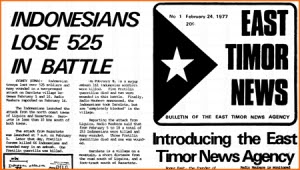 ETN was an Australian newsletter in the top rank of influential Timor solidarity newsletters in the early post-invasion years. In its first two years, it was the principal international vehicle for publicising, in English, radio communications from the Fretilin-led resistance inside Indonesian-occupied East Timor.

It began as a fortnightly publication in a newspaper format of ‘tabloid’ size. Like most comparable Timor newsletters of the time, publication became less frequent in later years. After the loss of radio contact with the resistance in early December 1978, ETN continued production with analyses of available information and reproduction of significant reports, including mainstream print media articles.
at Saturday, September 25, 2010