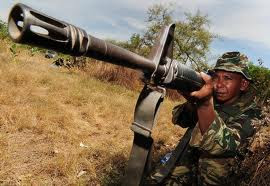 TEMPO SEMANAL Sunday, 5 September 2010 F-FDTL Soldier fires on Government Car: Liquica - On the evening of 4 September 2010 an East Timor defence force (FALINTIL-FDTL) solider created a public disturbance, shooting into the air and at a Government vehicle in Liquica District west of the capitol city Dili.

According to a Tempo Semanal source, there were no injuries but the car received considerable damage from the soldiers bullets.

The soldier in question was in Liquica with his family and not on duty.  However, he was in possession of a military vehicle and firearm.

"He is an undisciplined soldier and has been transferred from his post before. In the morning he drove a comander to a ceremony then he was supposed hand over the car to another commander but he picked his wife up drove to Liquica. His actions are unacceptable so he is now under detention for investigation. He has created public disturbunces, destroyed state property and left behind his gun. This crime needs investigation then if found guilty the soldier will have to be held responsible." said an angry FALINTIL-FDTL Commander who asked not to named. He added that the soldier may be dishonorably discharged from the defence force.