ETLJB 10/09/2010 SYDNEY  - A peak civil society law and justice organisation in East Timor, the Judicial System Monitoring Program, has condemned the pardoning of criminals who committed serious crimes during the 2006 crisis and the attacks on the Prime Minister and President on 11 February 2008.

Amongst the 26 convicts that were pardoned, 3 were found guilty by the Courts and sentenced to long prison terms for the shooting murders of 8 police officers in front of the Ministry of Justice by military personnel on 25 May 2006 . The other 23 were found guilty for their involvement in the attack and attempted murder of the President and Prime Minister during which the President himself almost died.


In a press release on 31 August 2010, JSMP stated that the practice of granting pardons by the President in East Timor has created a great deal of confusion.

“So far the President has been given room to exercise his competency in an excessive manner (outside of what is reasonable), in contradiction with ordinary practices, in a discriminative manner with a tendency to misuse the constitutional prerogative that he has been granted.”

“We all understand that the justice system in Timor-Leste still remains extremely vulnerable and is undergoing a process of reconstruction.

Therefore JSMP is concerned that if one of the components of the state or one of the sovereign organs does not take a sensible and careful approach to the exercise of prerogative rights then this can seriously threaten the importance of and commitment to establishing a legal system that is credible, authoritative and independent.

Irresponsible political decisions like this will destroy the functioning and credibility of the legal system itself,” the statement continued.

JSMP outlined its objections to the way the pardons were granted by President Ramos-Horta as being that:

1. The pardons were granted to all convicted persons on an equal basis, although they were involved in crimes of a different nature.

The pardoning process was not based on individual assessment of the circumstances of each convicted person, which is the normal practice.  The use of authority outside of the normal process can lead to the discriminatory use of presidential authority in the granting of pardons because other convicted persons who have served their prison sentences have not received a pardon or had their sentence commuted.

2. The decision of the president to grant pardons to the 26 convicted persons indicates that the decision issued by the court was not appropriate or even erroneous.

This is indicative of an ‘extraordinary’ practice, because ideally pardons are only granted in exceptional circumstances, and there shouldn’t be a practice to grant pardons every time there is an important day on the calendar.

3. Pardons should only be granted in situations where specific consideration has been given to an individual case or a convicted person.  Cases and convicted persons should not be grouped together and assessed collectively, which has occurred in this instance.

4. The 26 convicted persons who were granted pardons had been given different sentences (their prison sentences ranged from 5 to 11 years). These sentences reflect the fact that each convicted person was found guilty of crimes carrying various degrees of gravity and subsequent penalties.  Decisions issued by the courts are always based on the facts revealed through a trial process that is thorough and credible.

Therefore the President must present reasons why the court’s decision was deemed inappropriate or why the full sentence, or at least half of the sentence, should not be served.

5. Every paragraph in the Presidential Decree on Pardons provided the following grounds:  “good behavior and for humanitarian reasons”. This indicates that there was no separate assessment of each convicted person during his period of imprisonment.  These sorts of practices will end up destroying normal procedures, minimizing the authority of the courts and rendering court decisions meaningless.

7. Article 65 (2) of the Timor-Leste Penal Code allows for a prison sentence to be commuted to ‘conditional release’ if the convicted person has displayed good behavior and has served half of his sentence. 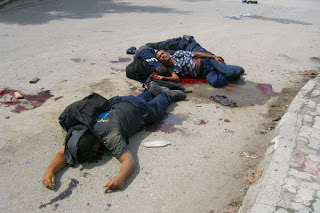 8. The aforementioned granting of pardons relates to very serious crimes, even though they are not categorized as crimes on an international level, but they still fall into the category of very serious crimes and have extremely serious implications on the criminal justice system and the community.

9. This decision also reflects a policy that does not value and respect the supreme efforts of the judicial institution and does not encourage the public to have faith in the judicial system.

In addition to the reasons outlined above, JSMP believes that although the President has exercised his competence pursuant to Article 85 (1) of the Constitution, this article should be read together with other articles that deal with the Principle of Universality (equality before the law), the principle of the independence of judicial institutions and a number of other principles.  JSMP is particularly concerned and truly regrets the actions of the President who has often mentioned that his decision or policy to grant pardons is a reflection of his personal conviction and his own philosophy as a human being.

JSMP believes that the conviction and personal philosophy of a president are not recognized as a law that must be observed and implemented by the government to regulate matters concerning the granting of pardons.

In reality, this type of practice does not give much hope that in the future there will be a legal system that will provide equal protection for all people; on the contrary this will specifically destroy the framework of the nascent criminal justice system.