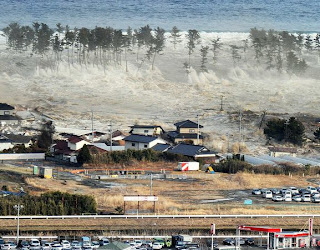 A shocked world witnessed the terrible events as they happened with ocean surges up to 10 metres (33 feet) high sweeping across the countryside demolishing everything in their path.

Dozens of huge aftershocks and separate and perhaps related quakes in the nation's northwestern region  have continued to terrify and traumatise the people of Japan while world governments offer unlimited assistance pending requests from the Japanese authorities. 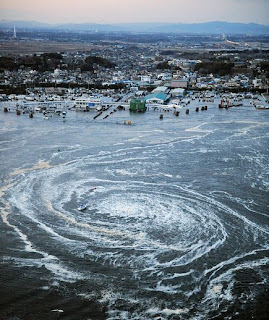 A nuclear emergency has also been declared by the Government of Japan as damaged atomic energy generators in the region begin to leak radioactivity into the environment.

The Prime Minister has grimly warned his people of the possiblity of even greater tsunamis hitting the coast today.

As the horrifying scale of the catastrophe becomes more evident, ETLJB again expresses the deepest condolences to the Japanese people.
at Saturday, March 12, 2011