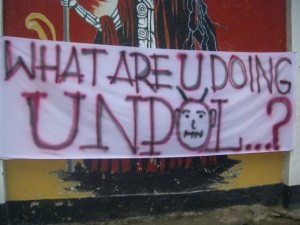 The process of handing over the security responsibility was done through signing a Memorandum of Understanding (MoU) between Prime Minister Xanana Gusmao and the Special Representative of the United Nations Secretary General, Ameerah Haq, at the Government Palace.

The Special Representative of the United Nations Secretary General in Timor-Leste, Ameerah Haq, said although the UN Police had handed over security responsibility to PNTL, they will continue to professionalise PNTL officials so that they can carry out their work more effectively in the future to ensure security and stability in the country.

PM Gusmao also called on the PNTL officials to carry out their work professionally and effectively to guarantee security in the country.
at Wednesday, March 30, 2011