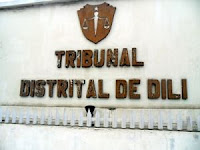 ETLJB 14 June 2013 - According to East Timor's peak law and justice monitoring civil society organisation, the Judicial System Monitoring Progam, on 11 June 2013 the Dili District Court tried a case involving crimes against humanity that occurred in 1999 in Aileu District before, during and after the autonomy referendum. This case was registered as Case No. 273/C.Ord/2011/TDD. The hearing was scheduled to hear the indictment and the testimony of the defendants.

“Crimes against humanity are very serious crimes and therefore JSMP urges the courts to deal with these matters appropriately to ensure and guarantee justice for the victims” said the Executive Director of JSMP, Luis de Oliveira Sampaio.

The public prosecutor alleged that in 1999 before, during and after the referendum, the defendants were involved in the commission of aggravated murder, attempted murder, illegal detention, forced removal of civilians to Atambua-Indonesia, burning the homes of residents, committing rape against women and sabotage against community groups working for and under the CNRT movement.

The public prosecutor alleged that the defendants violated Article 14 of UNTAET Regulation No.15/2000, regarding crimes against humanity.

The trial will continue before a panel of judges comprising Jose Maria de Araujo, Paulo Teiquera and Julio Gantes.The Public Prosecution Unit was represented by Luis Landim and the defendants were represented by public defenders Jaime Leite and Jose da Silva.