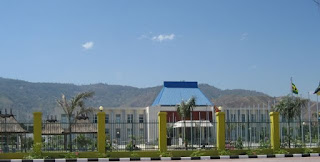 "It is the jurist's responsibility (rather than an irresponsible intervention) to identify and describe constitutional questions from the perspective of a democratic and legal theorist."

There follows an extract from an article published by La'o Hamutuk, that attacks my analytical work on the provisions of the Constitution.

Here are the problematical propositions: That an article that I wrote entitled East Timor President Lu-Olo Discredits Office of President & Perverts the Will of the People is "unconstructive and irresponsible commentary." It says that my article "lambasts President Lu Olo with sensational accusations of constitutional abuse".

Another well-known Australian academic told me that she has to disagree with me because "there is much debate about the quality of Ministers."

Both of these propositions of course are exercises in obscurantism and obfuscation of the central jurisprudential questions that I have sought to elucidate. Both are incapable of responding in a substantive manner to the legal issues in question.

Neither of these critiques have put forward any justification for their propositions at all nor sought to address the quite substantial question of the implementation of the Constitution. The arguments elucidated in my article (and in a subsequent article East Timor: On the President's Constitutional Powers on Nominations by Prime Minister of Ministers of State) seek to elucidate the jurisprudential analysis of a Constitution.

It does not matter to me whose Constitution is under scrutiny. It is the jurist's responsibility (rather than an irresponsible intervention) to identify and describe constitutional questions from the perspective of a democratic and legal theorist.

Not one commentator has put forward any justification whatsoever for what the President has done. It seems that what he has done is beyond criticism. Or is not problematical or is a socially acceptable phenomenon notwithstanding the Constitution.

The words of the Constitution stand.

As for lambasting Lu-Olo, it's of no consequence that it is Lu-Olo; we have witnessed the flouting of the rule of law and unconstitutional conduct many times by all players.

Why do certain views hold that those who defend democracy when it is under attack should remain silent? Because pointing out the truth is intolerable. And acquiescing in unconstitutionality is something that should be advanced? What nonsense.

The observations of the writer of the La'o Hamutuk article are insidious censorship. A pointless exercise that throws no light on the causal issues of unstable government in the face of an overwhelming election victory. In the end, such observations seek to distort the cruel reality facing a population whose very health is made vulnerable by unconstitutional actions that I have highlighted.

It is not so much the unilateral actions of outsiders but the problematical behaviours of the men and women of the Revolution who failed to transition the war factions into a responsible democratic polity and the issues - to the point of blood and bodies on the streets of Dili - that impacts the people's heads that should be the central focus of municipal civil society organisations in East Timor, rather than launching sensationist attacks on authors who seek to elucidate the law and democracy to those apparently unaware of it.

In the end, the La'o Hamutuk writer's drivel is certainly unconstructive and irresponsible commentary.

Furthermore, the deployment of the word malae by Lao Hamutuk reeks of xenophobia.