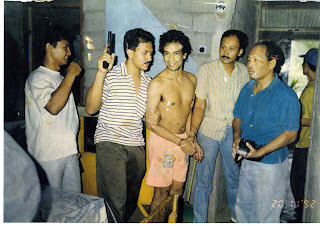 I believe this photo is unpublished and records Xanana's 6.00am capture in Dili on 20 November 1992. It looks like it is in one of the internal rooms of the Araujo family home in Lahane (up behind the market) where Xanana had been hiding. This photo was apparently fished out the ashes of a military building in Dili in September 1999 and has finally made its way to me. It is clearly a highly posed shot, especially considering Xanana is smiling directly into the camera (a coded message to the viewer perhaps). Xanana has recorded that that he knew they were coming to arrest him and had already decided not to resist. I am trying to identify the Indonesians in the photo and wonder if anyone can help me. Some background follows which explains who I think might be in the photo.


Kopassus Major Mahidin Simbolon, backed up by 30 or so troops, arrested Xanana (he was later promoted to Colonel, skipping the rank of Lieutenant Colonel, for his actions here). Brigadier Theo Syafei (local operational commander in East Timor) has also taken credit for the arrest and in 2005 relayed a discussion over whether they should execute Xanana before revealing they had captured him. Syafei took Xanana to his home and phoned Armed Forces (ABRI) Commander Try Sutrisno and asked him if he should kill Xanana. Sutrisno replied, "Wait, I 'll get back to you later" but didn't. Syafei took Xanana to the Officer's Mess and later that afternoon Sutrisno arrived in Dili and questioned Xanana.

Xanana records that he suggested to Sutrisno and his contingent (of 20 Generals Xanana says) they hold a dialogue with the representatives of the people of East Timor. Questioning where these people were Xanana boasts he dared them to carry out a referendum and find out.

Read all about it in the full biography available from Australian Scholarly Publishing.

Thanks to Sara Niner at http://saraniner.blogspot.com/2011/02/unpublished-photo-of-xanana-capture.html
at Saturday, February 05, 2011