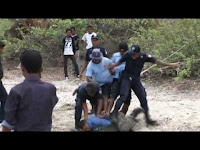 De Jesus said the recent report by HAK on human rights violations by PNTL members is false because it was not based on fact.

“When you make a report about…(human rights violation) (it) must come with concrete data, and people’s names (must also be included),” de Jesus said. He added that, “You must not just mention something general like this (that doesn’t) have justification.”
at Saturday, December 17, 2011