Victims of 2006 violence sue over house burning and looting 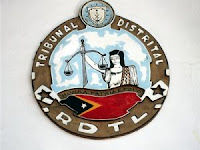 ETLJB 15 September 2012 - The Dili Weekly reported on 7 September that two residents of the Fatumeta suburb in Dili have sued three people in the Dili District Court accusing them of looting their properties and then burning them down during the 2006 crisis.

One of the plaintiffs in the action gave testimony in the Dili District Court last month that on 26 October 2006, the three defendants came to our houses and “called us firaku [Easterner] so we ran away and sought refuge at the seminary but when we came back our houses were burnt to the ground and everything we owned was gone.”

The other plaintiff alleged that the three defendants were members of a gang who were always armed and often insulted him.

“The chased us out of the neighbourhood and when we returned we were so heartbroken because everything had been stolen. Our belongings that were lost were worth US$1000,” he said.

One of the defendants said he was hanging around with the other two to help but not with the intention of stealing.

“My family and I were running for our lives, as there were people armed to the bone around us, so it doesn’t make sense that we were there to steal,” declared one of the defendants.

The defendants totally denied the accusations of theft.

The case was heard by a panel comprising Judges Antonio Gomes, Antoninho Gonsalves and Antonio do Carmo.

The judges demanded to hear the testimonials of all involved including one defendant who did not appear at the trial before sentencing.
at Saturday, September 15, 2012