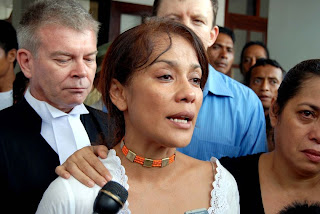 Angelita Pires earlier this year was found not guilty of involvement in the February 2008 attempt on the lives of President Jose Ramos Horta and Prime Minister Xanana Gusmao but prosecutors were quick to appeal the verdict.

At the time of the attacks, Pires, 44, was the lover of rebel leader Alfredo Reinado, who was shot dead in a gunfight that left Ramos Horta critically wounded.

Prosecutors accused Pires of being an "indirect author" of the assassination plot by convincing Reinado to kill the leaders and financing his rebels.

But an appeals court on Monday upheld the lower court's finding that there was insufficient evidence against the dual Australian and East Timorese citizen.

"Justice has won the day," he told AAP.

"The Timorese justice system was really able to rise to the occasion."

Mr Tippett said prosecutors could not launch any further appeals.

It is understood Ms Pires - who has been in Australia since the original verdict was handed down - plans to return to East Timor, possibly to pursue a political career.

It is believed Ms Pires also has begun writing a book about her life with Reinado and subsequent legal ordeal.

Hollywood reportedly has expressed interest in her story.

More than 20 Timorese men have been jailed for between nine and 16 years for the assassination attempts.
at Sunday, June 20, 2010