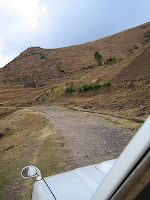 The AMP de facto government has finally admitted its US$74 million 'referendum package' of public works has been a costly failure.  Its Secretary of State for Public Works, Domingos Caero, said "about 60 per cent of the Referendum Package Projects are of bad quality, and we have already taken steps to penalize the companies that we have identified as being no good." (Timor Post 7 June 2010).

FRETILIN MP and member of parliament's Infrastructure Committee, Inacio Moreira, today said failure was inevitable given that the 'referendum package' - so-called because it was announced coinciding with the 10th anniversary of the 1999 Referendum on Independence  - was done hurriedly to spend the budget allocated for the controversial heavy fuel power station that was ultimately cancelled and for electoral advantage.

"There was no planning, no engineering or technical designs, no feasibility studies, no environmental impact studies," Mr. Moreira said.  "Now the man in charge of the package is admitting that the result is '60 per cent bad'."

Mr Moreira said the de facto government was now trying to make contractors the scapegoats for the government's own failure to plan and prepare projects.

"FRETILIN has persistently raised questions in parliament and highlighted in the press numerous projects that have been abject failures," he said.

"We have also asked questions regarding the legality of budget allocation and the government's decision to directly transfer money to the National Contractor's Association, AECOOP, even before any physical works had commenced.

"We will seek to hold the government accountable through a parliamentary investigation.  This must take place urgently, because the de facto government has already launched a similar package, called the 'Development Package', again without adequate planning or preparation."