Illegal weapons in Ermera continue to challenge stability in Timor-Leste 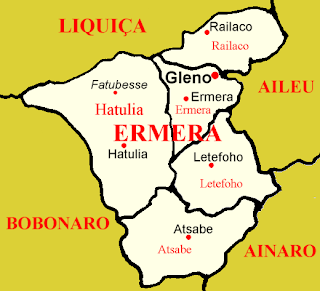 The president made the comments on Tuesday (1/6) at Nicolau Lobato international airport regarding the issue of the illegal armed groups that try to threaten the local residents in Ermera.

Horta stressed that he had no detailed knowledge of the problems in Ermera but he recognized that acts of crime were staying in high in that district.

Unfortunately every year many problems appear in Ermera district. Various groups appear in Ermera, Stadu village, Letefoho, Atcabe, Bononaro and Lolotoi. I will contact our police commander to discuss this issue,” Horta said.

Horta added that apart from doing operations, the state could hold social interventions such as holding dialog.

MP Menezes said the intelligence services in the country had not shown an adequate reaction in relation to the illegal armed groups in Ermera.

Menezes urged the state institutions, mainly the intelligence department, to justify this issue.

He added that the intelligence service should work professionally, as the public wanted factual information.

The deputy police commander initially stated there was an illegal armed group, but later he recognized that the group does exist. Therefore, the police need to investigate it professionally,” Menezes said.

He added that the illegal armed groups were led by the ex-Indonesian military officer known as 745.

Monteiro called on the country’s people who were talking on security to open their mind and to have good views on security.

He added that what he had publicised was based on the facts collected from the National Investigation Department and said all the residents in Ermera knew this situation.

President Horta to conatct Commissioner Monteiro Timor Post, June 2, 2010 language source: Tetun - President Jose Ramos Horta has said that he would contact the Police Commander Commissioner Police Longuinhos Monteiro in order to seek a solution to end the presence of the illegal armed groups in Ermera.

President Horta said he had no clear information about illegal armed group in Ermera, but he added that there many problems had appeared in Ermera so far.

For few years there have been many problems emerging in Ermera district, Estadu village, Letefoho, Atsabe, Bobonaro and Lolotoe,” President Horta said.

In relation to this case, President Horta said he would contact the PNTL Commander Longuinhos Monteiro to hold operations and hunt down the illegal armed groups.

Horta also said that the police should have dialog with the local residents on the issue of illegal armed groups.

We should not wait for the police intervention but we need to know why this problem appears. If this case is 100 percent as acts of crime then the police should take the necessary action against it, but if this case appears due to politics then we should intervene in a social manner,” President Horta said.
at Friday, June 04, 2010