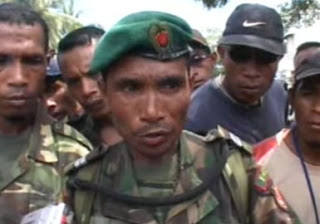 Suara Timor Loro Sa’e, June 2, 2010 language source: Tetun - President Jose Ramos Horta did not grant any pardons to prisoners on the commemoration of the Timorese Independence Restoration Day on May 20 this year because the ex-rebel leader Gastao Salsinha and his followers were not included in the list proposed by the Government.

An unnamed source said the Government had prepared a list of the prisoners who would be pardoned but the pardon did not happen because Horta did not see Salsinha and his men’s names in the list.

Minister for Justice Lucia Lobato said she did not know the reason why President Horta had not declared the pardon of the prisoners.