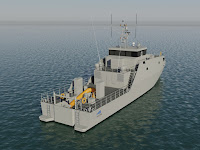 "We have managed to resolve the border dispute between the two countries and it is particularly valuable and important that we have achieved this, but we also have a program to build the new Pacific patrol ships," said Malcolm Turnbull in Perth.

"We are providing these ships to our partners in the Pacific and we have defined that two ships could go to Timor-Leste and today Prime Minister Mari Alkatiri has confirmed that Timor-Leste accepts the ships," he said.

This is, he said, "two more ships that will be built here and will patrol the waters of East Timor," Turnbull said.

Turnbull's unexpected announcement was made during a gala dinner of the Asia-Pacific Regional Conference that is taking place in Perth, Western Australia, and after what initially seemed like a gaffe to the head of the Government.

Turnbull, who was sitting next to Mari Alkatiri on the dinner table - where German President Frank-Walter Steinmeier was also present - did not mention in his welcome speech the presence of the Timorese prime minister.

Following the official speeches, including Steinmeier's speech, Turnbull again called for the floor and before the hundreds of participants at dinner announced the Timor-Leste agreement that was confirmed during a bilateral meeting he held with Alkatiri today.

"We have to thank the Australian Government for this offer. Once we have agreed on our common border, now we also have to defend it," said Alkatiri Turnbull called the stage for the announcement.

"We consider this a great opportunity, we accept this offer and we will do our best to share the borders," he said.

Mari Alkatiri and the official Timorese delegation in Perth for the conference today had visited the Australian Austal unit on the outskirts of Perth where the Pacific Maritime Safety Program (PMSC) ships are being built. its acronym in English) of the Australian Government.

The head of the Timorese Government explained to Lusa that the V Government, led by Xanana Gusmão, decided "to correctly and consistently" postpone a decision on the "until the maritime border issue" between Timor-Leste and Australia has been resolved.

"Now with the almost signed treaty and the border almost decided, we can return to this subject," Alkatiri explained.

The Austal PPB40 ships, 29.5 meters long and 8 meters wide, has a steel hull - to increase its durability - and the remaining aluminum structure, which allows it more breadth and speed of action.

With 20 days of autonomy to be at sea and a maximum speed of 20 knots the ship is considered ideal for patrolling in the south coast zone of East Timor.

Mick Rozzoli, defense attaché at the Australian embassy in Dili, who accompanied the visit today, explained to Lusa that the matter has been on the bilateral agenda since 2013 when first Timor-Leste contacted Australia regarding the possibility of joining the Ship Program Patrol in the Pacific (PPBP, in its acronym in English).

This program, which was replaced in 2014 by the PMSC, allowed the donation of 22 patrol vessels to 13 beneficiary countries, all from the Pacific region.

Central to the Australian defense relationship in the region and in force since 2014 the PMSC provides for the donation of up to 21 patrol vessels that will replace the 22 ships given to the same countries between 1987 and 1997, the first of which must be delivered in October 2018.

In addition to the donation of ships, the program provides support in training up to three crews - each vessel can have up to 23 elements - and maintenance for 30 years.

Rozzoli explained to Lusa that the fact that Timor-Leste did not immediately join the program implies that the country, if it signs now, will only be able to receive the ships in 2023, and it is essential to begin "the training of the crew" from now on.

Timor-Leste already has, he recalled, some members of its naval component with training - including one received in Australia - but it will be necessary to move to a broader training and training that in some cases may take more than a decade.

If the training is not completed by the time the two ships are ready to be delivered, one option may be mixed, East Timorese and Australian crews.
at Saturday, November 04, 2017