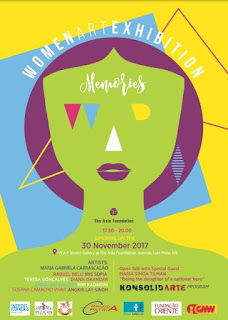 3 pm - Discussion Series at the Asia Foundation Conference Room
- H. E. Lurdes Bessa, the Vice-Minister for Education and Culture about the subject: Art, Culture and education.
- Introduction to the new Magazine PAW “Power Art Women”
- Discussion on the establishment of a Women Artists Association “AMA”

This new artistic initiative, carried out by feminine elements only from different performative arts, aims to consolidate a passage through the past. Aware of the insurmountability of the space-time gap. Nine artists seek a reunion with memory. The project of rescuing the memory is a work of recreating a subjectivity, re-arrange residues of past experiences that are thus repositioned in the present. Memory is a process writing that inscribes the subject in the order of existence. A mnemonic language does not print what it captures. She thinks, composes and reproduces a record that is, forever, in becoming. More than an archive of recognition, a memory produces a mirage, an illusion of a possible truth. Memory traces should be provided as part of a cultural production. Attached to a chain of meanings, a memory doesn’t ensure the adaptation to reality, but a reproduction of a social pattern. It is an act of continuous and endless creation. What is truly important to the subject are the more intense memories. A memory preserves in itself and for itself, in a writing whose characters are indecipherable.

Nourished by a vital energy, the recording of traces from past experiences is instituted as a desiring project. In an incessant search for fulfillment, the energy of memory trails the paths of a forever insatiable desire. Faced with the impossibility of an encounter with the past, rests the desire of a potential reconciliation with history, memory and with its own life.
Maria José Barbosa, UNTL Teacher
at Thursday, November 30, 2017