The fate of Indonesia's hero's graves in Timor Leste 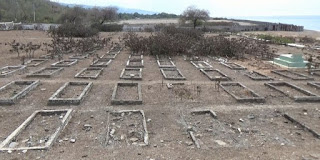 !WARNING MACHINE TRANSLATION ORIGINAL INDONESIAN TEXT Friday, November 10, 2017 15:21 Reporter: Peter Ananias Merdeka.com - The aggression of development along with the existence of an abandoned tomb in East Timor, has made East Timor Province residents worried about the existence of their dead relatives after the referendum in 1999.

There are eight demands voiced to the Indonesian government, to be followed up. One of them is, the removal of the bodies of the heroes who died and was buried in the Hero Cemetery in Timor Leste.

In Timor Leste, there are 12 Hero Cemetery Gardens owned by Indonesia spread over 12 districts. One of them is in Liquisa district, about 30 kilometers west of Dili.


The tumbling condition of the tomb accompanied by agile development in East Timor, made the demonstrators who joined in the Timor East Timor or Untas in Kupang demanded that the bodies in the Heroes Cemetery in Timor Leste, be transferred to Indonesia.

The existence of Indonesia's hero's grave garden in Timor Leste is one of the issues discussed by the Indonesia-Timor Leste Commission of Truth and Friendship (KKP).

The CTF is an Independent Commission established to discuss and provide recommendations on sectarian or residual problems after the referendum in 1999. In one of its recommendations, the CTF supports the decisions of the governments of both countries to maintain and group the Hero Cemetery in several places.

Director of Centro Nacional Chega, Hugo Fernandez when met in Dili, East Timor, Friday (27/10) said that personally working in East Timor Memory Center did not want the tombs to be moved out of Timor Leste. According to him, this will be a lesson for the next generation that there is a history between the two countries.

"I think let it be here to be a lesson, yes, that these coming children will be a lesson that in that particular period there is the history of these two nations by leaving a trail of historical traits like this.I think Indonesia understands this so that the real action is yes showed last month, the TNI Commander here does not ask to dismantle but rehabilitate, "he said.


The same was also expressed by the first governor family of East Timor Province establishment Arnoldus Dos Reis Araujo did not want the tomb of the founder of the pro-integration Apodeti party to come out of East Timor. According to Yosefina Da Silva Barros who prefers Indonesia and currently resides in Kupang to merdeka.com, said it is a big task for the Indonesian and Timorese governments to find a solution.

"Anyhow removing the graves of the fallen heroes here will not necessarily solve the East Timor problem, because there is an emotional bond, there is the bond of our ancestors, we are born there everything, the assets of all kinds of land and so forth and so forth abandoned in There's no way we can move our ancestors buried there so easily, that's impossible, "Josefina said when met at his residence in Baumata RSS housing on Sunday (22/10).

The Indonesian Ambassador to Timor Leste, Sahat Sitorus, on Thursday (26/10) in Dili said there are 12 Indonesian Hero Cemetery Gardens scattered in Timor Leste. Not only the TNI are buried there, but there are also thousands of pro-integration sympathizers.

"The challenge is certainly not a political issue, because we have to communicate with the Ministry of Foreign Affairs of Timor Leste and Indonesia in this case Menkopolhukam, TNI Yes, of course we come to our brother's house, have to bring yourself or the habit here called what how move the framework that is a reward, "Sahat said.

Meanwhile, Prime Minister of Timor Leste, Mari'i Alkatiri when met at his residence, Saturday (28/10), did not comment much. He said it was up to the Government of Indonesia to be moved or to remain in Timor Leste.

The Government of Indonesia and Timor Leste in October 2016 then, had a joint meeting in Belu District, East Nusa Tenggara. The governments of both countries agreed that the Indonesian Heroes Cemetery scattered throughout East Timor would be grouped in three locations: Dili, Baucau and Haliwen Atambua.
at Sunday, November 19, 2017