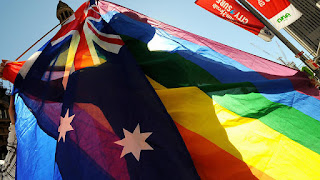 ETLJB 14 November 2017 - The Australian Same-Sex Marriage Prebiscite "Should the law be changed to allow same-sex couples to marry?” has resulted in the following result: Yes: 62%; No 28%.

The government is now bound to change the definition in the Marriage Act 1961 of marriage.

Presently, marriage means the union of a man and a woman to the exclusion of all others, voluntarily entered into for life.

One proposal is to amend the definition to the union of 2 people to the exclusion of all others, voluntarily entered into for life.

(a) the union of a man and a woman to the exclusion of all others, voluntarily entered into for life; or

(b) the union of 2 people to the exclusion of all others, voluntarily entered into for life. Apart from the appalling drafting, this definition would be rejected by anyone schooled in the law as oxymoronic; two contradictory definitions sitting side by side.

In any event, it seems that gay marriage will soon be the law of the land in Australia. It will not matter what the genders of the parties are.

What of close neighbour, East Timor, bent under the yoke of the delusion of catholicism and its antihuman doctrines which will never contemplate gay marriage in that jurisdiction. Australian visitors are probably the most frequent of foreign arrivals in East Timor after Indonesia and the Prime Minister has recently emphasised the importance of the tourist sector and its future development to encourage more visitors.

East Timor will have to deal with the issue of married same-sex couples and it should have prepared a policy on this matter so that the Australian government can inform citizens of how gay married couples will be treated by the East Timorese State.

The recent declarations by some East Timorese leadership about homosexuality and the treatment of gay citizens show some positive signs. The East Timorese gay community seems to be developing well and coming out of the political closet. The gay community in Australia is well-known for its economic strengths and outspokenness on matters of concern; particularly discrimination and less-favourable treatment. Were that to occur, that would impact negatively on prospective tourists from Australia.

See also on ETLJB: Does the Gay Marriage Vote Mean Anything for East Timor?