Oil Fund balance drops to US$15.8 billion with existing oil production depleted by 2022 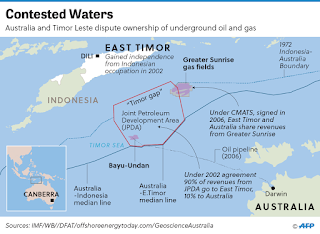 NOTE: CORRECTION TO ORIGINAL BALANCE OF $5.8 BILLION ETLJB 9 November 2017 East Timor's oil fund dropped to US$15.8 billion (about 570% of GDP) in 2016, the second year of a net reduction, the International Monetary Fund (IMF) reported in a statement released in Washington.

The Oil Fund is being reduced due to significant withdrawals to finance the public investment programme. But the IMF noted that "it is necessary to know whether these large projects will generate sufficient economic return, leading to an increase in tax revenues and, therefore, improving fiscal sustainability." This answer to this question remains to be seen.

More alarming is the IMF report's observation that  the oil field currently in production will be depleted by around 2022.

IMF economic analysis urges the Government of East Timor to increase taxes and enforce existing taxation obligations on citizens as a way of addressing future revenue streams. The IMF team observed that "internal revenue collection is key" and "welcomed the creation of the Customs Authority and the Tax Authority, as well as the action plan to increase compliance with tax obligations."

Suspiciously sounding like an IMF-motivated intervention, the Government of East Timor has announced the proposed introduction of a new tax on the people. The Value Added Tax is anticipated to be passed by 2020 "in order to stimulate the mobilisation of more internal revenues."

The IMF economic analysis does not mention anything of the social or political costs or benefits of the VAT. What is certain is that any new taxes will be a blow to East Timorese families, so many of whom live in poverty. The IMF economists will not care as long as their corrupt economic ideas hold sway.