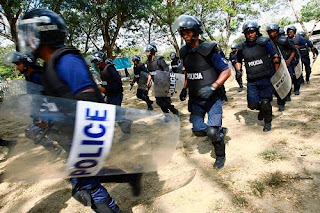 PNTL’s Command will not tolerate its officers who engage in politics Timor Post 17 November 2009 Acting General Commander for the Timorese National Police (PNTL), Inspector Mateus Fernandes said police officers who were suspected of being engaged in politics would not be tolerated.

Training for 20 officers of BOP based on NATO standard Timor Post 17 November 2009 Acting General Commander for the Timorese National Police (PNTL) Inspector Mateus Fernandes said the training was attended by the 20 officers of the Timorese police of BOP (Public Order Battalion) was based on the international and NATO’s standard; therefore he [Fernandes] called for the trainees to seriously participate in the training.

Transformation from old generation to new generation is important Timor Post 17 November 2009 Bishop for Baucau Diocese Monsignor Basilio do Nascimento has called for the Timorese youth not only giving their hope to the leaders who had formed this country, such as President Jose Ramos Horta, Prime Minister Xanana Gusmao, and Mari Alkatiri.