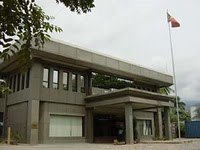 Mr. Vasconcelhos was appointed after the BPA was transformed into the national central bank.

He pledged to exercise his tasks properly by leading and managing the bank and will prioritise the national interest.

“I express my thanks to the prime minister who has given me the responsibility and I will make efforts to do my job well,” he said.
at Thursday, September 15, 2011