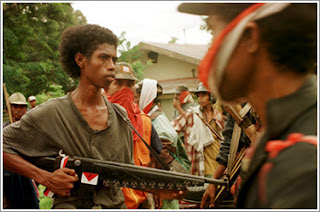 East Timor Legal News 20/09/2011 Source: Timor-Leste National Alliance for an International Tribunal  - Introduction: On the 8th July 2011 the Dili District Court read out its final decision in a case involving serious crimes, namely Case No. 13/C.Ord/2011. This case relates to a crime against humanity committed by the sentenced person Valentim Lávio, who was a member of the Besi Merah Putih (BMP) militia, against the victim Patricio Sarmento Viegas on 6 September 1999, two days after the announcement of the results of the referendum that was organized and supervised by the UN in 1999.

The Dili District Court heard this case in the first instance and found the defendant guilty and sentenced him to nine years imprisonment.

Even though the court of first instance convicted Valentim Lávio on 8 July 2011, until now (almost three months later) the case has not been followed up because the final decision of the court has not been executed without reasonable cause because the presiding judge in this matter has not yet issued a written decision to the parties, namely the family of the victim and the convicted person. Therefore, the convicted person Valentim Lávio is still free and enjoying his rights just like other members of the community in Liquica.

Members of ANTI (Alliance for an International Tribunal) are concerned and extremely disappointed that the international judges have not worked in a professional manner and have not taken responsibility for the role that they have been entrusted with, by failing to prepare a written decision in three months.

This delay has not been explained and should not have happened because it has disadvantaged all parties, including the family of the victim and all members of society who want justice in this case.

The tardiness and inefficiency of the court can reduce public trust in the formal justice system, especially in this case, and this can lead to the parties pursuing inappropriate means to seek justice in accordance with their conscience that could trigger undesirable occurrences.

Therefore, all of the members of the National Alliance for an International Tribunal (ANTI) hereby submit this statement to the relevant institutions, especially the judges of the Dili District Court:

1.      We urge the panel of judges, in particular the presiding judge João Felgar, an international judge who led the trial of this crime against humanity committed by Valentim Lávio, a member of the ‘Besi Merah Putih’ militia, to fully prioritize and focus on the case that he presided over so that a written version of the final decision can be produced in the near future and given to the family of the victim and the convicted person.

2.      We urge the panel of judges, in particular the presiding judge João Felgar, an international judge who led the trial of this crime against humanity committed by Valentim Lávio, a member of the ‘Besi Merah Putih’ militia, to promptly issue a written decision regarding the final decision of the court with due regard to:

- Principles of a fair, effective, efficient and affordable trial as adhered to in democratic nations;

- Article 60 (i) of the Criminal Procedure Code that states that “to appeal, under the terms of the law, against any decision that is unfavorable to him/her”; which means that this article grants the convicted person or victim the right to lodge an appeal when the court of first instance issues a summons to the parties regarding the final decision; unfortunately until now the court has not issued a written decision to the parties;

3.      We are concerned that the convicted person is still free and may abscond overseas or to Indonesia after hearing the verbal announcement of the decision, because the court did not impose any restrictions in its decision;

4.      We urge the public prosecutor to execute the decision issued by the court of first instance if no appeal is lodged by the parties;

We end this joint statement by appealing to all parties, to the people of Timor-Leste, victims and families of victims, both individually and collectively, to continue to demand justice for past crimes, because the right to justice is an integral part of life in a democratic society. ANTI believes that the development of the nation will not be complete if there is no justice for past crimes.

ETLJB Editor's Note: The photo (from Tempo) shows Besi Merah Putih members on patrol carrying weapons before attacking pro-independence supporters in the city of Likisa 29 kms to the east of Dili on 6 April 1999. The Besi Merah Putih was supported by the Indonesian security apparatus. (AP Photo/Sam Martins)
at Tuesday, September 20, 2011