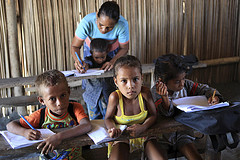 Televizaun Timor-Leste, November 16, 2010 language source: Tetun - The Council of Ministers last Wednesday approved the general state budget for 2011 which is totalling US$ 985 million.

The Council of Ministers has also approved amount of money of US$1 billion* which will be allocated to humanitarian aid for tsunami and volcanic eruption victims in Indonesia, including funds for evacuating the Timorese students from the volcanic eruption in Yogjakarta.

* ETLJB Note: This amount is more probably $1 million not $1billion! Evenso, its an extraordinary amount of money for East Timor to be giving to Indonesia. Imagine how many new houses, schools or medical clinics that would build for the people of East Timor!

President Horta stressed that he was surprised with such a great of amount, as he was yet to have the Government’s proposal of the referred budget.

MP Aderito Hugo da Costa from the National Congress for the Timorese Reconstruction (CNRT) said the total amount of the general state budget for 2011 as presented by the Government reflected the Government’s policy.

MP da Costa recognized some failures in the budget execution, particularly in the capital development, adding that it happens due to climate change.

MP da Costa also said another obstacle was the change of the procurement system within the Technical Secretary of Procurement (STA).

“This is not only reason, but the record of presentation showed that the budget execution in 2008 reached 48% and it increases to 90% in the 2009, but it faces a problem in 2010 this is because of climate change,” MP da Costa said.

MP Fernanda Borges from the National Unity Party (PUN) and MP Francisco Miranda Branco from Fretilin said they were pessimistic with the Government in executing the general state budget, adding that the Government lacked capability to execute the budget.
at Wednesday, November 17, 2010