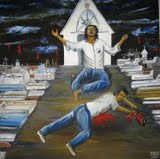 Diario Nacional, November 11, 2010 language source: Tetun - MP Domingos Mesquita from the National Unity Party (PUN) has urged the Indonesian Government to disclose the location of the skeletons of the November 12, 1991 victims who were massacred by the Indonesian Armed Forces (ABRI).

MP Mesquita made the request because many skeletons of the victims had not been discovered yet.

“I think what should be done by the Government is a good step of building monument for the victims, but the most important thing is the Government should pressure the Indonesian Government,” MP Mesquita said.
at Friday, November 12, 2010