Government will not regulate work of journalists 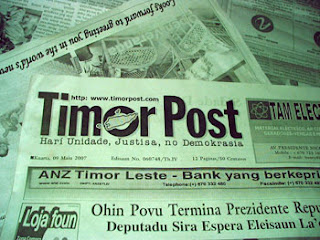 “I believe that with code of ethics for journalists which is being discussed by the journalists will have no perception that the Government will regulate the work of journalists,” Coelho said.

Coelho added that the Government’s role was to approve the draft of this code of ethics which would be submitted by the Timorese Journalists Association AJTL).
at Thursday, November 11, 2010

Dn't know its good or bad.